One of the most venerable traditions in science fiction is the story prompt. John Campbell used to suggest story ideas to his writers. His famous "Write me a creature that thinks as well as a man, or better than a man, but not like a man"defined the genre's ideas of aliens - as well as explained many a universe where humans were the only intelligent species. He also would have stories written to match covers. Many other publishers and editors over the years have continued this tradition, inspiring many of the genre's works.  So, despite being neither editor nor publisher, and in the hopes of triggering a writer more skilled than I, I am throwing my own list of suggestions into the ring.

Let me be explicitly clear about this. I am suggesting these concepts in my own person as Nathan, The Pulp Archivist. I am not speaking in any capacity for Castalia House or any other publisher. Even though I blog for Castalia House, these ideas are not related in any way to Castalia House's submissions process. Castalia House has their own concepts page curated by their editors, of which I am not one. These are a blogger's idle brainstormings, nothing more.

That said, if any of these ideas do tickle a passing writer's fancy enough to sprout a story, please let me know. I would be happy to write a review.  And if none of these do, I expect to grow the list over time.

1) A mirai-ki of the 20th century Space Race. For those unfamiliar with the form, Kevyn Winkless described it as:


– a form in which the author writes an interpretation of the present or the past (often fairly recent past) from the perspective of a “prophet” in the distant past.[11]

This is a little hard to wrap one’s mind around in the abstract, so let me give an example: were I to write a mirai-ki today, I might take on the voice of a narrator living in the 15th Century, recording his visions of World War 2.

Although the form is Japanese, the prophet need not be.

2) A Gothic romance - or similar type of supernatural mystery -  featuring the native haunts and haints of the United States, as might be found in Manly Wade Wellman's John the Balladeer stories or the Foxfire American Library.  While both of these have an Appalachian focus, the ghost stories need not be limited to the Appalachian states.  Oh, and Gothic romances could also be quite light on the romance part as well...

3) Write a story that explains the cover image to Jeffro Johnson's Appendix N.  Why is the axe wielding warrior leaping towards the dragon?

(Once again, my ideas, not Castalia House's.) 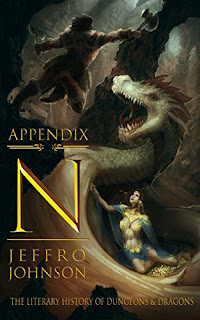