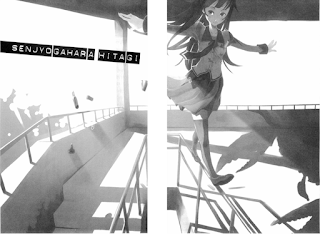 As part of an upcoming gig, I have been reading Bakemonogatari for a review.  Bakemonogatari is a recently translated light novel, a descendant of pulp fiction unique to Japan.  Incorporating manga-style illustrations, these stories are aimed at middle and high school students, but have caught on with wider audiences.

After Koyomi Araragi catches the falling Hitagi Senjogahara at the start of "Hitagi Crab", he discovers that she is effectively weightless.  In all respects but her weight on a scale, Hitagi is a normal healthy girl. Intrigued, he investigates further, asking her former classmates about her past.   To guard her secrets, Hitagi threatens Koyomi with a box cutter and a stapler, but a strange mention of a crab prompts Koyomi to try to help her regain her missing scale-weight.  He introduces Hitagi to Meme Oshino, the man who had rescued him from a vampire and a classmate from a cat possessing her. A specialist in aberrations, Oshino identifies the source of Hitagi's affliction as a Crab of Weight, also known as a stone-weight crab, and one of the eight million gods of Shinto.  To free Hitagi, however, Oshino says that she must confront the issues in her past that caused her to make a pact with the crab god.  He can help her, but only Hitagi can save herself...

Dent recommends starting with "a different murder method for the villain to use."  In this case, Hitagi offers an unusual mystery instead, a girl who is effectively weightless.  From there, he divides the story into four 1,500 word parts. As translation affects the word-length of the story, instead of the 1,500 words of each section of Lester Dent's Master Formula, I will be using chapters.  Fortunately, "Hitagi Crab" has eight chapters which line up roughly with the sections Dent suggests.  From hereon, there do be spoilers:


FIRST 1500 WORDS
1--First line, or as near thereto as possible, introduce the hero and swat him with a fistful of trouble. Hint at a mystery, a menace or a problem to be solved--something the hero has to cope with.

2--The hero pitches in to cope with his fistful of trouble. (He tries to fathom the mystery, defeat the menace, or solve the problem.)

3--Introduce ALL the other characters as soon as possible. Bring them on in action.

4--Hero's endevours land him in an actual physical conflict near the end of the first 1500 words.

5--Near the end of first 1500 words, there is a complete surprise twist in the plot development.

Matching "Hitagi Crab" to this outline, we see:

1) Koyomi catches Hitagi as she falls down the stairs, and then discovers that she is weightless.

2) Koyomi asks Tsubasa Hanewaka about her classmate, Hitagi, to learn more about the mysterious girl's past.

3) Koyomi, Hitagi, Tsubasa, Oshino, and an unamed crab are all introduced in this section.  Although Tsubasa does not have much to do with the plot of "Hitagi Crab", she is the relationship character by which the other humans are connected to each other.

4) Hitagi confronts Koyomi, sticking a boxcutter and a stapler inside his mouth.

5) Hitagi does not want to be helped.

1--Shovel more grief onto the hero.

2--Hero, being heroic, struggles, and his struggles lead up to:

1) Hitagi is dangerous with her school supplies, stapling the inside of Koyomi's cheek.   She is also as sharp with her words as with her improvised weapons.  Worse still, we find out that Koyomi had recently been attacked by a vampire.

2) Koyomi has to convince Hitagi he can help, which he does by showcasing a miraculous healing ability.  He then introduces her to Oshino, and they both eventually talk Hitagi into accepting their help.

3) Other than another death threat from the stapler girl, there is no action at this stage.

4) Although Oshino as an omyodo practitioner can help Hitagi, only Hitagi can save herself.  At this time, Hitagi joins Koyomi as the hero of "Hitagi Crab".

1--Shovel the grief onto the hero.

2--Hero makes some headway, and corners the villain or somebody in:

4--A surprising plot twist, in which the hero preferably gets it in the neck bad, to end the 1500 words.

1) Hitagi reveals that her mom is a cultist, and that her adherence to the religion broke her family.

2) The villain is identified as a Crab of Weight, a type of Shinto god that takes weight away from people in exchange for a request.

3) Hitagi, Koyomi, and Oshino confront the crab.  The crab pins Hitagi against the wall, crucifixion -style.

4) Hitagi admits that she had made a deal with the crab to take away her emotional attachment to her mother.  In exchange, the crab took her weight.

1--Shovel the difficulties more thickly upon the hero.

2--Get the hero almost buried in his troubles. (Figuratively, the villain has him prisoner and has him framed for a murder rap; the girl is presumably dead, everything is lost, and the DIFFERENT murder method is about to dispose of the suffering protagonist.)

3--The hero extricates himself using HIS OWN SKILL, training or brawn.

4--The mysteries remaining--one big one held over to this point will help grip interest--are cleared up in course of final conflict as hero takes
the situation in hand.

5--Final twist, a big surprise, (This can be the villain turning out to be the unexpected person, having the "Treasure" be a dud, etc.)

6--The snapper, the punch line to end it.

1-3) Koyomi and Oshino pin the crab to the floor.  Hitagi is helpless against the wall until she begs the crab to return her mother to her.  The crab relents, taking away Hitagi's curse and restoring her weight.

4) Hitagi wanted nothing to do with her mother, as her mother had invited the cult leader to the house to rape Hitagi.  Hitagi escaped by braining the man with her track cleats.  Seeking revenge, the cult leader bankrupted Hitagi's family.  Soon after, Hitagi made her deal with the Crab of Weight.

5) The next day, Koyomi goes to weigh himself.  He now weighs 100 kg, or his weight plus that of Hitagi's normal weight.

6) The gods can be so sloppy in doing their jobs.

Thus Lester Dent's pulps methods are still in active employ in a different language, country, and time from the Depression-era Chicago that inspired his Doc Savage stories, as well as countless other pulps.
Posted by Nathan at 7:26 PM