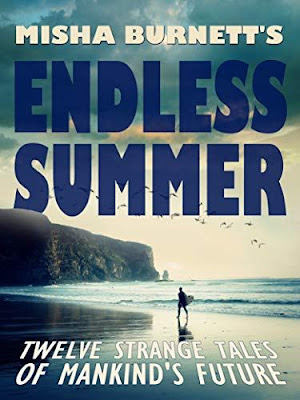 “For me, Misha is the consummate craftsman.”–Schuyler Hernstrom, writer of “Mortu and Kyrus in the White City”.

“Today is the first day of the rest of your life.”

“Do the next thing. Work on the job at hand.”

“You’re going to do this thing because it needs to be done and there is no one else.”

Ten years ago, it was popular for a certain segment of Science Fiction and Fantasy Fandom to wax eloquently about Kipling’s “Sons of Martha”, in whose care “that the gear engages; it is their care that the switches lock.” And while some came close to the idea Kipling expressed, they approached it from the point of view of supervisors and managers. The actual fabricators and maintenance personnel remained invisible.

Until now. Until Misha Burnett’s Endless Summer, a collection of 12 science fiction tales and nightmares dealing with the efforts, often thankless, needed for humanity to live and thrive, whether in the current day or some far-flung future. Sprinkled throughout are nightmare where those efforts are no longer to hold back that other peril, “The Gods of the Copybook Headings”. And behind it all is love, in all of its twisted yet still hopeful forms.

If there is one word that sums up Misha’s writing, it might just be Selah. Meditate on these things. Extremely contemplative, extremely blue collar in a way the Expanse guys wish they were. Never just a popcorn story. Misha is a rarity in the current time, a science fiction writer who lustily embraces the New Wave instead of avoiding it. And he brings that dream-like fascination with humanity in all its varied and occasionally malignant forms to his stories.

He also grasps with theme, when most writing advice, from Stephen King on down, treats it as an afterthought or heady accident. And there are plenty of common themes running throughout these stories. Decline and fall, hope and rebuilding. Outsiders. Broken people working out their happy endings with fear and trembling. The invisibility and necessity of blue collar work.

Science fiction tends to show that there are beings that think differently but just as deeply as we do. Misha’s “Milk, Bread, & Eggs” posits that certain experiences are universal. Such as prepping for a disaster.

“Milk, Bread, & Eggs” and “These are the Things that Bounded Me” may just be good homespun advice for the uncertainties no doubt awaiting us. “These are the Things” is a story of quiet heroism and endurance that science fiction, so enamored with kings, scholars, and officers, tends to miss.

“The Island of Forbidden Dances” is a nightmare of the current day, forged from the current fascination with voyeurism and exhibitionism. Like Misha, I am surprised this hasn’t been done yet.

“In the Driving Lane” is a nightmare of tomorrow, or perhaps tonight. None are more skeptical about complex systems and inventions than those tasked to their maintenance. And Misha’s long years in maintenance work have rendered him skeptical about self-driving vehicles.

“Heartbeat City Homicide” is about the compromises needed to keep a city running, set in a city inside a geothermal tap.

“Serpent’s Walk” is another Ozark nightmare–the *nice* part of the Ozarks reoccurring throughout this collection–with a mutant enduring a feral and just as mutated wilderness to get a bit of revenge. “My Foe Outstretched” is another revenge tale, with a bitter price for its destructive path.

The last four stories, “The Happiest Place on Earth”, “mDNA”, “Endless Summer”, and “The First Man in the World” deal with love in its various meanings and forms. Together, they form a refutation of the old Harlan Ellison title, “Love Ain’t Nothing But Sex Misspelled”, as a heavy contemplation of duty and responsibility runs through each. “The First Man in the World” by itself is worth the full price of the book. In a saner, less narcissistic time, it would have won awards.

In short, buy Misha Burnett’s Endless Summer, as it takes as truth the myriad of flatteries Science Fiction tells about itself. Adventure, wonder, inspiration, and even a chance for self-reflection are all here. Just not in the forms and characters you might expect.

Posted by Nathan at 6:53 PM No comments: 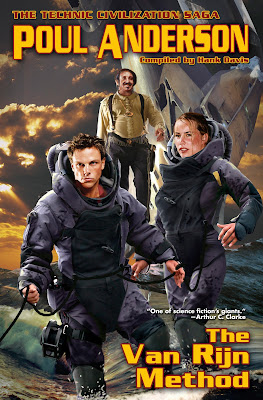 “After three years we were weary and had suffered losses. Oh, the wonder wasn’t gone. How could it ever go–from world after world after world? But we had seen so many, and of those we had walked on, some were beautiful and some were terrible and most were both (even as Earth is) and none were alike and all were mysterious. They blurred together in our minds.”

The Technic History is Poul Anderson’s best-known setting, spinning a tale of the rise and fall of empire across time and space Easily the equal of Asimov’s Robots-Empire-Foundation history, the Technic History is filled with notable characters such as the malapropist merchant prince Nicholas Van Rijn, his protégé David Falkayn, and the dashing intelligence agent Dominic Flandry. But where Asimov ruthlessly probes the failures of robotics and psychohistory, Anderson provides puzzles, adventures, and a more human understanding of motivations. Even in the alien minds that Anderson’s characters must strive against. For there are minds that think as thoroughly as man’s, even if they think differently, and understanding is only possible for those who observe and ponder.

“Wings of Victory” shows such an example, offering the first contact between humanity and the Ythrians, an avian species who would in turns rival and cooperate with the spreading human empire, as Van Rijn and Falkayn will come to know intimately. But that is several centuries in the future. At this point, humanity has undertaken a Grand Survey of space, and one scout ship has discovered intelligent life 300 light-years away from Earth. A small team of three is sent to the planet to discover as many clues about the alien race as possible before making contact.

Don’t expect to see the sanitary and patronizing Prime Directive here. Rather, Anderson acknowledges the dangers that come from the initial encounter between two cultures who share nothing but the ground they both currently occupy. Where even the best intentions may realize a bloody failure, and the subtlest of clues may bring peace. If anyone is paying attention, that is.

Layered on top of this first contact story is the familiar clash between leadership and authority. Aram Turekian is the natural leader with street-sense. Vaughn Webner is the man in charge with bookish learning and a fragile sense of his own station. Add the stress brought about by the presence of Yukiko Sachansky, the ship’s beauty, and the survey team might be too preoccupied to notice the predatory avians hunting them.

The story is simple, following the familiar steps as the proud and bookish Webner jeopardizes the survey team through one blunder after another, sparking the Ythrians’ wrath. Turekian’s quick and cool thinking allows the team to evacuate, but only after Yukiko calms the clash between egos. The team escapes, and presents themselves a second time to the Ythrians, to far greater success. It’s a simple story, to be sure, as the text is crowded with exposition about the Ythrians. Rather than a story about exploration, “Wings of Victory” is an excuse to reveal more about the classic avian race that plays such an important role in the Technic History. The strife in the survey team is just a vehicle to get the audience to care about the exposition.

And it succeeds, somewhat. “Wings of Victory” was written in 1972, before the fascination and later frustration with the infodump overwhelmed science fiction. As a result, there is too much exposition interrupting the story for current fashions. It is also a side dish to the main course of Van Rijn, Falkayn, and Flandry. As a result, those looking to read the Technic History should proceed straight to Van Rijn’s stories and come back to this prequel afterwards, to better appreciate both the Technic History and “Wings of Victory”.