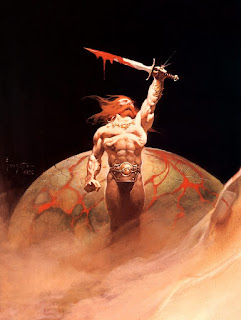 On 20 December, 2022, sword and sorcery scholar Brian Murphy posted a review of Karl Wagner’s Night Winds at Goodman Games. In the middle of this, he expressed hope for a Wagner revival, and dropped an interesting rumor for the hopeful:

On the rumor-ish side, publisher Baen is reportedly laying the groundwork for a long-awaited reprint of the Kane stories. As I understand it, the estate holders have been approached and some tentative agreements are in process. This would be an enormous win for sword-and-sorcery fans, who have been deprived of good, reasonably priced print editions of these wonderful stories for far too long. Today you are limited to what I understand to be poorly edited Kindle editions, very expensive/out of print hardcovers by Centipede Press, or increasingly hard-to-find though still obtainable Warner paperbacks from the 70s/80s.

The Kane series has been on my radar for a while now, as Karl Wagner was close friends with Manly Wade Wellman and David Drake. But, like Wellman’s stories ten years ago, readers have had to luck into the original paperbacks, luck into expensive premium hardcovers, or know someone who knows about quiet reprints. (Like how the ebook of Mountain Magic replaced all of Henry Kuttner’s stories with Manly Wade Wellman’s Who Fears the Devil? because of rights issues. And it’s still the best way to get John the Balladeer stories.)

Fortunately for Wellman fans, DMR Books and Shadowridge Press have been bringing long out-of-print Wellman stories and novels back in affordable ebooks from DMR Books and paperbacks. Perhaps, with these rumors surrounding Baen, it is Karl Wagner’s time to return.

And, with The Hollywood Reporter’s news that Kane has been optioned for TV series and/or movies, now is a perfect time.

Wagner’s stories, published throughout the 1970s and early 1980s, center on an immortal antihero named simply Kane who is equal parts warrior, sorcerer, marauder and conqueror.

Lee, Trapani and Schneider, who count It, Winchester and the Paranormal Activity movies among their numerous credits, will produce what could end up as a series or feature film. Also on the producing team are Keith Previte and Kevin Elam of the Karl Edward Wagner estate.

First appearing in 1973 and going on to appear in 20 short stories and three novels, Kane falls squarely into the epic fantasy sphere that proved influential to the geek crowd of that time, and 4 million copies have been sold. Famed fantasy painter Frank Frazetta even illustrated several covers.

Fantasy icons Conan the Barbarian and Elric of Melnibone were clear influences, which is not a surprise, as Wagner, on top of being an author, was an editor and a publisher, putting out Conan collections as well as gothic horror and pulp volumes. He died at the age of 48 in 1994.

So, if you’ve read Kane, or, like me, have always been interested in seeing what the hype is about, feel free to show your support so that Baen might bring Kane back.

Mongoose and Meerkat: The Flying Mongoose

Originally written on 19 March 2022 for the Castalia House Blog.

First posted at the Castalia House Blog on 13 March 2022.

I just gasped up at her. This slip of a girl, the most notorious woman burglar the underworld has ever produced! 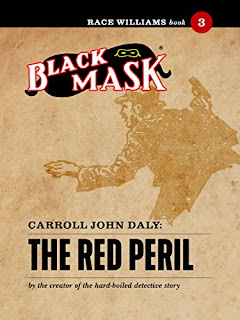 Race Williams returns, fresh off of bouts against the Klan and blackmailers. This time, an unsavory man throws $1,000 at him to not take a certain young woman’s case–to find lost diamonds. Instead, Race takes the case to spite the scumbag.

For Miss Muriel Barton needs those diamonds to receive her inheritance–an inheritance soon to be spent to find her missing half sister, Nellie Coleman. By accepting her case, Race Williams finds himself unraveling a web of intrigue and blackmail keeping the half sisters apart. And when he follows a lead to the diamonds, he crosses the path of a masked burglar who has her own interest in the case.

If Williams’s previous adventure, “The Knights of the Open Palm”, represented the first popular outing of the hard-boiled detective, Carrol John Daly’s “The Red Peril” is an early example of weird menace, seasoned with the same anti-heroic thread running from Raffles, Lupin, and Fantomas to the Shadow and beyond. And complete with the ropes and the whip. The tale and the lashwork might not be as sensationalistic or as spicy as that seen by an indignant Congress 20 years later, but the slope from here is slippery.

But said slope also illustrates that the ingredients that would create the hero pulps and superhero comics were percolating for years before a certain radio refrain of “The Shadow knows” prompted the emergency creation of a pulp hero. Also, that these ingredients were stewing in contemporary mystery and not just the historical romances like Zorro. And the result, at least at this stage, is another masked cat burglar in the same line as Catwoman and Fujiko Mine. A capable foil and openly romantic interest for a detective of action. And sometimes intimidatingly so.

The pace of the story is rapid, with at least three whipsaw revelations that change everything that Race Williams has previously learned before plunging him into one final life-or-death confrontation. And although Williams is a bit of a self-acknowledged braggart, his skills with his fist and his firearms carry him through situations where mere wits enough are not sufficient. It is satisfying to watch as Williams finds himself out of his depth, only to bluff and intimidate his way back into commanding his surroundings.

Compared to the bloodless puzzles of the Gold Age of Detective stories, Race Williams and “The Red Peril” are earthy, sensationalistic, and bloody. A constant drip of adrenaline, and, occasionally, fear. A short read, to be sure, but one crammed full of plot and excitement, with little time to rest.

Posted by Nathan at 9:29 AM No comments:

Originally written for the Bizarchives on 5 March 2022.

The Big Three, According to the Library of Congress

Originally written for the Bizarchives on 27 February 2022.

Argosy: The Father of Pulp Fiction

Originally written for the Bizarchives on 13 February 2022.

Any magazine that published all three of these pulp, nay, American icons would be assured of its place in literary history. But Argosy is much more than that. Argosy is the first pulp fiction magazine, and by far one of the most prestigious of its time. With a run lasting from 1882 to 1978, Argosy set the standard for the entire field. While a general adventure magazine, Argosy dabbled in a little bit of everything, from the fantastic, science fiction, historical fiction, Westerns, war stories, and more. And whenever a genre grew popular in Argosy, some enterprising individual, such as Hugo Gernsback, would create a new genre pulp line to try to cash in its success.

Pulp fans tend to focus on the time between 1894 and 1942 as Argosy’s golden age. Prior to that time, Argosy focused mostly on children’s adventures. Soon, it faced the problem all children’s magazines faced: what happens when your audience grows too old for your stories. So Argosy retooled for a new audience: adults. And to compete, it developed a new format: the pulp magazine, printed on cheap paper.

Circulation quickly skyrocketed until in 1906, it reached a circulation of half a million copies per issue. By comparison, The Shadow at its height cleared 300,000, Amazing at science fiction’s all-time high, only 200,000, Weird Tales and Astounding averaged at 50,000, and today’s science fiction and fantasy magazines, only 5,000 per issue. Argosy’s success inspired a sister magazine, All-Story Weekly, with which it would later merge in 1920. Argosy would be sold to Popular Publications in 1942, which would spell the end of Argosy’s pulp focus, as it would begin to drift into men’s adventure before ending as an almost softcore magazine in the 1970s.

Argosy represents a merger of four magazines: the original Argosy, All-Story Weekly, Cavalier, and Railroad Man’s Magazine. The name changed often to reflect these mergers, but whether Golden Argosy, Argosy All-Story Weekly or Argosy and Railroad Man’s Magazine, the name always drifted back to Argosy. And because of the wide focus on various adventure genres, Argosy later gave birth to Famous Fantastic Mysteries, a magazine devoted to reprinting the best science fiction and fantasy stories found in Argosy. Famous Fantastic Mysteries would sit in science fiction’s Big Three throughout the 1940s alongside Astounding, Unknown, and Thrilling Wonder Stories.

But enough about history. Let’s get to the stories.

Edgar Rice Burroughs and his creations Tarzan and John Carter/Barsoom need little introduction among pulp fans. But if you are interested in strange tales in even stranger places, these stories would be the first place to start. Barsoom, alongside Ralph Milne Farley’s “The Radio Menace”, Otis Adelbert Kline’s “The Swordsman of Mars”, and Abraham Merritt’s “The Moon Pool”, represent mainstream pulp science fiction, and were the stories that inspired the creation of Amazing and later Astounding, magazines devoted solely to science fiction.

Historical adventures abounded in the pages of Argosy. The aforementioned Zorro, for one. But pulp master Max Brand, better known for his Westerns, filled Argosy with Renaissance, Musketeer, and Colonial era swordsmen such as “Clovelly”, Tizzo the Firebrand, and John Hampton, “The American” in the middle of the French Revolution. And the Three Musketeers found their match in Murray Montgomery’s rakehelly adventurers and Richelieu’s swordsmen, Cleve and d’Entreville. And back in the days of Alfred the Great, Phillip Ketchum’s “Bretwalda” would return to save England from the viking menace.

Fans of the weird would find much in Argosy to enjoy. J. U. Giesy and Junius B. Smith would popularize the occult investigator with their stories of Semi-Dual, a strange son of Persia who would solve mysteries “by dual solutions: one material, for material minds; the other occult, for those who cared to sense a deeper something back of the philosophic lessons interwoven in the narrative.” And zombie stories abounded throughout, with Theodore Roscoe penning “Z is for Zombie”, “A Grave Must be Deep”, and many other Haitian zombie stories.

Mystery fans delighted to stories by Carroll John Daly, father of the hardboiled detective genre, including those of Satan Hall, “the cop who believes in killing criminals as they kill others.” W. C. Tuttle’s Sheriff Henry dabbled on the comedic side, as a comedic actor inherits a Western ranch—and the role of sheriff. And Norbert Davis penned his tales of sleuth Doan and his canine partner Carstairs.

If there is one common element tying these stories together, it is how easily most of these tales disappeared from publication, often for decades at a time. But, thanks to recent efforts, many of these once popular series are being offered once more to readers through imprints like the Argosy Library and Cirsova Classics. And although a recent attempt to revive Argosy as a quarterly fell through, there are more undiscovered gems and current writers of adventure waiting for pulp fans to find.

Posted by Nathan at 8:53 AM No comments:

First posted at the Castalia House Blog on 25 January 2022.