“In this life, victory does not always go to the righteous. It rains on the wicked and on the good. In fact, evil is strong, for many hands work against Elohim. The rebellion begun in the Celestial Realm is now carried out on Earth.”— Giants, by Vaughn Heppner

A pre-Flood slave escapes his brutish Nephilim master by climbing down a cliff full of angry pterodactyls, only to be rescued by a warrior for Elohim. And that’s just the first chapter of Vaughn Heppner’s Giants, the first of the Lost Civilizations series. Drawing inspiration from Biblical and extra-Biblical stories of prehistory, Giants soon thrusts Joash, the aforementioned former slave, into the mortal struggle between men and the wicked sons of the fallen angels, the Nephilim. Or better known as giants.
Although Joash finds a home as a servant of the Elohim warriors, what scant freedom humanity enjoys from being the giants’ playthings depends on the spears and chariots of Elohim. And the best horses run wild on the plains of Jotunheim, far to the north of Elohim lands. Joash accompanies an expedition rounding up wild horses in the land of the giants, stalked by an unseen presence that seemingly directs sabertooth ambushes against the Elohim camps. While tooth and claw winnows away the ranks of the Elohim warriors, Joash comes face to face with Mimir the Wise, the most cunning of the Nephilim. And after that, a life-changing choice.

“Elohim lifts His own champions. He or she can be anyone: a singer, a patriarch, a warrior or even a groom. But no one is forced into the contest. Elohim’s choice must be accepted. A free will is needed for that.”

Prehistory has long been a popular setting for heroic fantasy, but few settings come with as much baggage as the Pre-Flood setting. More often than not, the action is yoked to proselytizing and apologetics, both for and against Judaism and Christianity. Giants is blessedly free of these distractions, using the broad outlines of Lucifer’s rebellion to fuel an epic clash of fallible and mortal good against brutal and uncaring evil. Broad strokes of Norse, Greek, and even Lost World elements round out the setting, which is drenched with mystery and hints of unexplored worlds. But what really matters to Giants‘ story is the action of the moment.
Like other independent fantasy tales, Giants offers a “good parts” version compared to recent entries in the traditional field. Survival in the wilds of prehistory is difficult enough without the threat of Nephilim attacks. The demands of scouting, sentry duty, and enduring the elements weigh heavily on Joash’s shoulders, with little time for indulging in the lavish histories and worldbuilding that fill epic history. Except when said history may offer a key to Joash and his companions immediate survival. This allows more time to be spent developing the suspense that heightens every ambush, chase, and standoff. The action is quick, imaginative, and dripping with verisimilitude. One particular action scene, where men, sabertooth tigers, and giants clash in the ocean’s waves was so engrossing that it was almost disappointing to turn the page and read “The End.”
Fortunately, there are now seven sequels to quench that particular thirst.
Posted by Nathan at 9:44 AM No comments:

"Dragnet, the documented drama of an actual crime, investigated and solved by the men who unrelentingly stand watch on the security of your home, your family and your life. For the next thirty minutes, transcribed in cooperation with the Los Angeles Police Department, you will travel step-by-step on the side of the law through an actual case from official police files. From beginning to end—from crime to punishment—Dragnet is the story of your police force in action."

Found while investigating a pulp by the same name.

Posted by Nathan at 3:01 PM No comments:

Elements of a Good Comic Script, by Stan Lee

In 1947, Stan Lee, then editor of Timely Comics, which would later be rebranded into Atlas, then Marvel, wrote in Writer's Digest that "There's Money in Comics!", explaining how a writer could adapt to the comics medium. As a result, Lee also explains many concepts of selling writing that are universal to all media before applying them specifically to the visual medium of comics.

Many a pulp writer made the transition.

After the comic legend's death, Writer's Digest hosted his article on their website, complete with script and artwork.

Here is another excerpt, dealing with the five elements of a good comic script.


But there’s more to comic strip writing than just knowing on which side of a page to type artist’s instructions. Let’s try to analyze some of the factors which go into the making of a good script:

Just as in a story, the comic strip must catch the reader’s interest from the first. The very first few panels should show the reader that something of interest is happening, or is about to happen.

The action from panel to panel must be natural and unforced. If a character is walking on the street talking to another character in one panel, we wouldn’t show him horse-back riding in the next panel with a different character.

There ARE times when it is necessary to have a sudden change of scene or time, however, and for such times the writer uses captions. For example, if we have Patsy Walker lying in bed, about to fall asleep in one panel, and want to show her eating breakfast in the next panel, the second panel would have an accompanying caption reading something like this: “The next morning, after a sound night’s sleep, Patsy rushes to the kitchen to do justice to hearty breakfast.”

Thus, by the use of captions, we are able to justify time and space lapses in our panels.

This is of prime importance. The era of Captain America hitting Red Skull and shouting “So you want to play, eh?” is over! Today, with the comic magazine business being one of the most highly competitive fields, each editor tries to get the best and snappiest dialogue possible for his characters. In writing a comic strip, have your characters speak like real people, not the inhabitants of a strange and baffling new world

Whether you are writing a mystery script or a humorous script, the same rule applies: Keep it interesting throughout. Any comic strip in which the reader isn’t particularly interested in what happens in the panel following the one he’s reading, isn’t a good comic strip.

All of the tricks you have learned and applied in writing other forms of fiction can be used in comic writing insofar as holding the reader’s attention is concerned. But remember, giving the reader well-drawn pictures to look at is not enough; the reader must WANT to look at the pictures because he is interested in following the adventures of the lead character.

An ending which leaves the reader with a smile on his lips and a pleasant feeling that all the loose strings of the story have been neatly tied together can cover a multitude of sins. It has always been my own conviction that a strip with an interesting beginning, good dialogue, and a satisfactory ending can’t be TOO bad, no matter how many other faults it may have.

Email ThisBlogThis!Share to TwitterShare to FacebookShare to Pinterest
Labels: writing

A Thousand Li: The First Stop 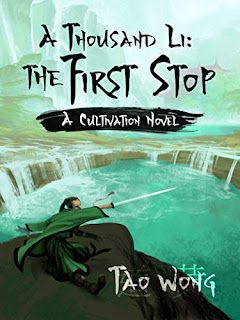 For those unfamiliar with the terms and conventions of xianxia cultivation fantasy, this copy of the Immortal Mountain's guide to the terminology might help.

Fresh on the heels of his acceptance into the inner circle of the Verdant Green Waters chi cultivation sect, Long Wu Ying returns in Tao Wong's A Thousand Li: The First Stop. Wu Ying quickly learns that while greater status can open more doors to knowledge and enlightenment, greater responsibilities are also demanded of him. As he takes the first steps to discovering his unique Way, Wu Ying struggles to find the right balance between his studies and the missions that grant him the contribution points needed to pay for his stories. However, outside the idyllic sanctuary of the Verdant Green Waters sect, war drums are beating, and the sect Elders lead Wu Ying and his friends on a desperate gamble needed to prepare for upcoming battles.

In The First Stop, Wu Ying switches from the well-defined goal of proving himself better than the nobles bullying him to the more open-ended trial-and-error of finding his life's Path. Each member of the sect has an occupation that both develops his or her Way and supports the sect materially. And, as Tao Wong wryly points out, every occupation feels the need to add 'spirit' in front of its name to make it more prestigious. For the first time in Wu Ying's life, he is judged solely on his merits as he diligently navigates his wandering way, by commoner and noble cultivator alike, although it takes months and quiet correction before he realizes that the nobles in the sect aren't judging him.

Of course, the nobles this round are easier to get along with--and easier on the eyes, as Wu Ying's kindly and refined medicine compounding tutor Liu Tsong and his spirited martial arts partner Li Yao both prove. Both women are merely setting out subtle hints at this stage, and if Wu Ying has yet to notice, he can be forgiven as progression along the Way requires studious diligence. It's admirable to see such a slow burn. Most xianxia stories embrace wholeheartedly the wish-fulfillment aspects of the story. Another protagonist in Wu Ying's footsteps would already be tilting his lance towards the sect's top beauty, the ethereal "Fairy" Yang Fa Yuan.

That restraint is evident throughout this second book. A Thousand Li is not a Chosen One fantasy, so Wu Ying does not need to be a wunderkind. In The First Stop, Wu Ying's chi cultivation progression is slowed down, and the admirable tendency to ground the abstract into the tangible permeates more than just chi cultivation magic. Whether martial arts strikes, blacksmith hammer blows, the turning of compost heaps, or identifying medicinal and poisonous plants, there are tangible descriptions and a sense of effort to each act. One of xianxia's genre weaknesses is that many of its authors treat items and actions as though they were selected via a Final Fantasy RPG menu. Tao Wong brings these abstract and throwaway ideas fully into the world for his characters to sense instead of just consume. This grounds the abstract and increasingly gamified Taoist concepts into understandable concrete actions. Leveling up isn't the abstract collection of experience or mana/chi, it is the forcible cleaning of clogged chi meridians--often accompanied by a moral, perceptual, or physical breakthrough as well. This rare appeal to verisimilitude makes the A Thousand Li series an excellent introduction to cultivation fantasy, especially those who may be drawn in by the "Hogwarts meets The 36th Chamber of Shaolin" settings of many a xianxia fantasy.

While mostly an idyllic exploration of Wu Ying's Path, The First Stop harbors an underlying foreboding as events outside the sect's cultivation sanctuary are escalating, both in the natural and in the supernatural. While the Verdant Green Waters sect makes desperate and costly gambles to keep with the cultivation and enlightenment arms race, it won't be until the upcoming The First Battle to see if these preparations will be enough. Whatever may happen, it is certain that Wu Ying, Li Yao, and the rest of their friends will be on the front lines of the upcoming war.
Posted by Nathan at 11:28 AM No comments: