Alexander Hellene’s The Last Ancestor follows the last remnant of Christianity in the galaxy, now on the alien planet of Yxakh. Refugees from persecution on Earth, the survivors of the long flight across the stars. But they are not alone on their new home. A lizard-like race nicknamed the Growlers shares the planet, and  their rulers have found Christianity as much of a threat as the rulers of Earth did. Only human technology and bravery keep an uneasy peace.
But while proximity breeds conflict, it also fosters curiosity. Garrett has forged a friendship with a Growler youth named Ghryxa over countless dives into caves and crash sites. What they encounter below the surface of Yxakh will carry Garrett into the Growlers’ Forbidden City and into the presence of the High Lord. A single world may doom humanity to extermination–or save it.
Action is the heart of The Last Ancestor, as ravenous lizardmen, Growler bullies, thrashing mega-predators, and even human police stand in the way of Garrett’s fateful appointment before the High Lord. Bravery takes many guises along the way: trickery, bluff, gunfire, grappling, and even escape. Although there is a philosophical question at the heart of the clash of cultures, it is not debate, but courageous and even rash action which settles the matter. It is one matter to profess faith, and another to wed it to deeds. And the action in The Last Ancestor is swift and perilous enough to bear the momentousness needed to perhaps sway the enraged and powerful. And, even more tellingly, The Last Ancestor does not shy away from the costs–both to Garrett and to the human settlement on Yxakh.
For The Last Ancestor was written out of frustration with Christian fiction steeped in weak protagonists, heavy-handed messages, surrenders to passivity, and unearned happy endings. And the response, like those of Vaughn Heppner and John C. Wright, is to marry decisive action and honest belief with coming-of-age stories. Alexander Hellene is but the first in a sudden wave of authors to move a masculine and deeds-based Christianity into science fiction, and he does so without falling into the cliches of either genre. For one, it is a relief to read of a clash of civilizations written without resorting to First Contact tropes.
The Last Ancestor calls to mind Jack Vance’s The Last Castle, both in the threat to humanity and in the ever-present mysteries that are but an arm’s reach away. The viewpoint, however is from the threatened oppressed, instead of the threatened oppressor, and the result draws more from the accounts of the lives of saints than the thin triumphalisms of previous Christian fiction and the faith in rational science.
But all that makes for pleasant ruminations in the hours after reading the very real story of a young man diving headfirst into mighty deeds as he tries to do right by his family, his friends, his people, and his God.
Posted by Nathan at 9:02 AM 1 comment:

Tower of the Bear, Heart of Winter, and Eden

Fenton Wood’s Yankee Republic series returns in Tower of the Bear, sending radio engineer Philo Hergenschmidt into the depths of the sea, across the amber waves of grain, and into legends half-remembered to search for the secrets of an impossible metal alloy.
Tower of the Bear continues to create a world where all the legends and tall tales of Philo’s boyhood are not only true, but even stranger than he previously imagined. Science fiction typically pays lip service to the much-vaunted sense of wonder, but Philo breathes it in with every page, whether racing Russians to the bottom of the Arctic Sea with Captain Nemo, delving the secrets of a Library of Everything, or following in an exiled tyrant’s footsteps into the Indian Nations of the West. Yet Philo–and the whole of the Yankee Republic series–deftly navigates the opposing demands of wonder and practicality, and his hard-won radio skills only add to the grandeur of the legends he walks among in an America that never was–but should have been.

In Nick Horth’s novella, Heart of Winter, aelven corsair Arika Zenthe’s unsuccessful bid to kill her pirate king father places her as his pawn instead. Now she must find the Heart of Winter, an ancient magical artifact with the power to destroy cities, before the poison in her veins kills her, knowing full well that if she succeeds, her father will sacrifice her to extend his life by centuries.
Heart of Winter is a Warhammer novella set in the Age of Sigmar campaign. Like most media tie-in fiction, it is a serviceable example of its genre, in this case, a rogue’s form of heroic fantasy. It also means that the stories cannot rock the boat of the greater setting, which denies Arika of the permanent and satisfying end of a final confrontation with her father. However, what sets Heart of Winter ahead of its pack of ten Warhammer novellas is the imaginative beginning where a fleet of pirates attempt to storm the pirate king’s flagship. This terror of the seas is built on, around, and in the sides of a leviathan, and the action does not shy away from using the organic setting of the monster’s hide, mouth, and viscera without resorting to gore porn.

Vaughn Heppner’s Eden closes out the first trilogy of the Lost Civilizations series with holy warrior Joash trying to escape from Nephilim captivity. But the crafty sons of fallen angels trick him instead into helping him find the last relic from Heaven on Earth, believed to be the only way the giants can defeat the angel guarding Eden. Meanwhile, the Elonite armies, led by the Seraph Lord Uriah, pursue the Nephilim in a desperate attempt to keep the brutal giants from eating from the Tree of Life and proclaiming themselves as gods over the Earth.
Not every test a hero faces is one of strength or arms. Here, Joash’s wits, endurance, and will are tested, first by the Nephilim captors, and then again by the purifying aura of Heaven radiated by the relic. Even though the clashes of wits and philosophy between Joash and the might makes right beliefs of the Nephilim occasionally–and uncharacteristically–grow tin-eared, Joash’s feats of endurance rival those found in classic sword and sorcery. Heppner never undermines the verisimilitude of the pre-Flood era with modern detatchment or judgements. But strength of arms is not neglected either. The Elonites and the Nephilim clash in a battle worthy of song. And throughout all is woven the legend of the zealous Elonite Lod, dread foe to the sons of the fallen angels. For the fight for Eden is but one cataclysm that might befall the pre-Flood world, and Lod marches to prevent the next.
Posted by Nathan at 3:16 PM No comments: 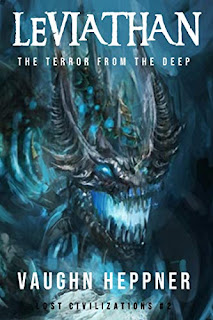 After their harrowing escape from the giants and First Born of Jotunheim, Joash and the Elonite warriors wait off-shore for a message from the wandering Lod, whose visions may hold the key to understanding the sudden moves of the Nephilim and their children. But the First Born are still hunting for the Elonites with all their servants. Now Joash must evade the roving patrols of giant pterodactyls, vampiric Gibborim, and even fleets of pirates as the Lord of the Elonites waits for a message that may never come. And then the giants rouse a legendary sea serpent to pursue the Elonites on sea…
While Leviathan might be the second in the now eight book Lost Civilizations series, it is the middle book of a trilogy featuring Joash’s adventures as a Seraph, a holy warrior for Elohim, and the mood follows the classic form of the trilogy. Leviathan is darker, moodier, and more perilous than its predecessor, Giants . Not only do the nets of the brutal Nephilim tighten around the Elonites, but the plans of the First Born are also laid bare. The children of the Fallen Ones aim to challenge even the angels to rule the world forever. Even as hope dies, mighty deeds still await for the Elonites, with Joash’s hunt of a giant pterodactyl a highlight in this more somber book. For faith in Elohim is not a passive one, and Joash and his Seraphs are called to fight evil, not endure it.
Also of interest are the first steps towards the impending clash of zealous Lod and vicious Red Cain. At this early stage, it seems to be a confrontation between Solomon Kane and Conan.
Leviathan serves as an excellent example of heroic fantasy and religious-milieu fiction. It is ironic that independent publishing, not traditional, has freed writers from word bloat, and heroic fantasy thrives in shorter novels compared to the doorstoppers of epic fantasy. The Lost Civilizations series focuses on the moment, revealing only the backstory and worldbuilding needed by its characters at this time and hinting at deeper lore. The perils and mighty deeds of heroic fantasy are more important to holding the reader’s attention, and the majority of the pages are spent on these. That focus also steers Leviathan away from the twin shoals of Biblical and religious fiction–preaching and passivity. Yes, the Elonites are men and women of faith, but the surrender and wait for God’s will stories of 90s Christian genre fiction are nowhere to be found. In the best traditions of heroic fantasy and its pulp forebears, Joash and the Elonites are decisive, eager to marry word and deed, and willing to endure the consequences of those decisions, even if it means chasing demon-spawn to the gates of Eden itself.
I eagerly look forward to reading Eden, the conclusion of this trilogy.
Posted by Nathan at 6:25 AM No comments: