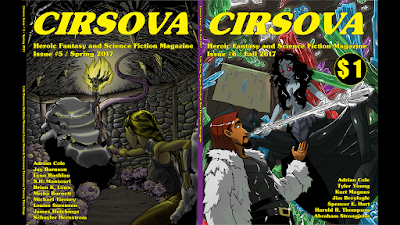 The Kickstarter for this year's Cirsova Magazine subscription is live.  For as low as $1, you can get digital issues of Cirsova 5 and 6, each one filled with sword and planet tales written by some of today's best in the field. This is what you can expect:

Our Spring issue (Cirsova #5) primarily features stories from Misha Burnett's Eldritch Earth Geophysical Society, a writing group devoted to telling Burroughsian adventure stories set on a pre-historic Lovecraftian Earth. Expect unspeakable monsters from the stars, cultists, sorcerers, lizardmen, crabmen, fishmen (and fishwomen) and every manner of daring rogue! Also, Adrian Cole’s Witchfinder Arrul Voruum investigates the lingering evil in Karkesh in an all new Dream Lords story, Michael Tierney cooks up a historical fantasy with Bears of 1812, and Lynn Rushlau tells of daring escape in Through the Star-Thorn Maze.  Plus, the latest installment in James Hutchings' My Name is John Carter.

Our Fall Issue (Cirsova #6) will feature the usual array of exciting SFF goodness, including the return of a few characters introduced to our readers in previous issues; Strongjohn picks up on Triton where At the Feet of Neptune's Queen left off, Thompson's adventurer Captain Anchor Brown pursues a mysterious god-beast deep in the wilds, present meets past in the Sacred City as Cole continues his Dream Lords saga, plus more Othan! We've also got some Raygun Romance from Spencer Hart & Tyler Young, and the start of a brand new Sword & Sorcery series by Jim Breyfogle.