In Another World with CEOs

Here's a pair of reviews dealing with the unlikely mix of business and otherworldly fantasy. For those who prefer their fantasy to be more adrenaline-fueled than cutthroat cozy, expect a surprise soon.

In Andrew Karevik's  CivCEO, Charles Morris, a forcibly retired CEO, is spirited away by mistake to another world. Abandoned to his own devices, yet gifted with the same skills as an otherworldly champion, Charles settles into the the role of mayor for a small village. But when the villagers discover Charles lacks the blessing of their goddess, they give him an ultimatum: improve the prosperity of the village in a month or die. Now Charles must draw on fifty years of business skills to grow his village--and keep away from the gallows pole.

CivCEO is a variation of the growing dungeon builder genre of litRPG fantasy, bringing the management and building aspects above ground and into the light of day. Like many a dungeon builder and litRPG, CivCEO is exposition-heavy as it explains Charles' various strategies for trade and development, albeit without abusing statistics sheets. Unlike said litRPGs, CivCEO does not get swept up into epic world-changing events over the horizon. Instead, it settles in among a cozier setting of Charles' village and its nearby neighbors. And it's this coziness, combined with Charles' goal of making sure that both sides of a deal come out ahead, that gives CivCEO its charm.

Light novels are admittedly wish-fulfillment literature, often shaped around the race for power, respect, and popularity. Middle-Aged Businessman, Arise in Another World!, by Sai Sumimori, upends the usual light novel formula by appealing to a different set of wishes. The main character, Onigawara Shouzou, starts as a successful head of his household with a happy and adoring wife and three loving, well-behaved daughters. Instead of being a burned-out salaryman, Shouzou owns his own home, enjoying the benefits of being a measured risk-taker, a mentor to his employees, an trusted adviser to his bosses. And that’s all before the cosmic accident that sends Shouzou and his family to another world.

Upfront, Middle-Aged Businessman is a gimmick series, with average writing. Like most gimmick light novels, the main character goes a little too readily from success to success and stock situation to stock situation, so it is not a particularly deep work. The appeal is in the novelty. And a happy middle-aged man fulfilled through his work and his adoring family is quite the novel concept for a light novel. Not that this is aimed at middle-aged men, but at the teen and young adult crowd. Actual young adults who could use an example of what life as a middle-aged man should be, not the salaryman burnouts and disaffected, alienated teens who are flooding the genre.

Volume one established the isekai portal fantasy premise, with Shouzou choosing what is best for his family instead of adventuring. He establishes a guild, adds value to it to be competitive in a cutthroat market, and, through his experience in the real world, earns respect and success from his coworkers and the new world’s society.

Volume two focuses more on mentoring. And this time, Shouzou has more of a challenge. Here, he must mentor a lazy, fat failure of a prince into being a man. His advice–mostly given through example, action, and carefully arranged encounters–sounds familiar to certain corners of the internet. Work hard, lift heavy weights, talk to a pretty girl, stop living for approval of other people. Care about yourself and try to improve every day. And it works. Which is the most novel idea of this series. There have been plenty of anime/manga/light novel attempts to motivate boys like the prince into more productive members of society. This is the first time I’ve seen them get actual useful and practical advice. Most previous attempts have the same effect as throwing a whiskey bottle at a recovering alcoholic.

Unfortunately, novelty only lasts so long. This is an otherwise unremarkable story caught up in as many standard light novel conventions as the otherworld fantasy setting allows a man and his family. And by the end of the second book, the welcome is growing a bit thin. But portrayals of happy families are rare enough in the medium that the first book is worth a read by light novel fans.
Posted by Nathan at 3:24 PM No comments:

I recently had the chance to contribute to a list of (mostly) 1970s and before crime and detective fiction, to include a healthy leavening of pulp and dime novel stories. Below is the final version of said list, mixing classics such as Arsene Lupin and Raffles with a host of Black Mask authors and a smattering of admittedly guilty pleasures such as The Destroyer, Kinky Friedman, and Fletch.

I'm looking forward to reading many of these in an upcoming project... 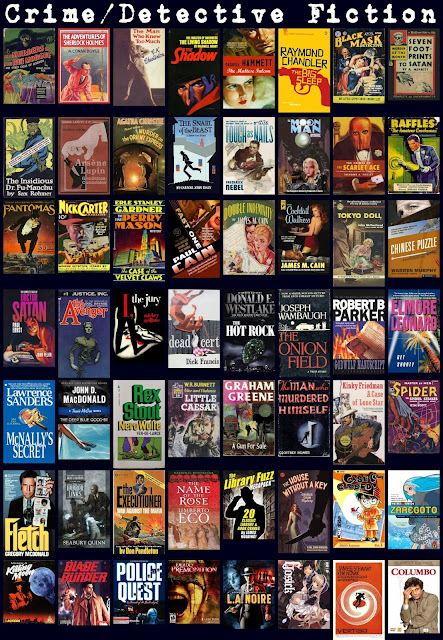 Posted by Nathan at 4:13 PM No comments:

Email ThisBlogThis!Share to TwitterShare to FacebookShare to Pinterest
Labels: recommendations 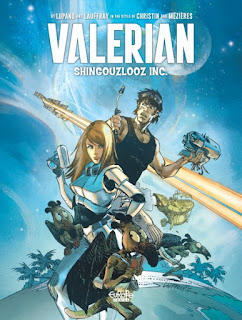 2010’s The Time Opener saw Valerian and Laureline’s forty-plus year search across space and time for the missing Earth come to an end. Soon after, Pierre Christin and artist Jean-Claude Mézières opened up their universe to a select few writers and artists, to write adventures from the time-travelling couple’s past–or perhaps even their future. Shingouzlooz Inc., by Wilfrid Lupano and Mathieu Lauffray, is the first to appear before English-speaking audiences, reuniting Valerian and Laureline with the series’ stool-pigeon troublemakers, the Shingouz.
Once again, the Shingouz run towards Laureline to make everything better, interrupting Valerian’s important negotiations with galactic bankers in the process. This time, the Shingouz somehow managed to gain ownership over the Earth, only to lose it in a poker game to the notorious Sha-oo, the Desiccator of Worlds. Sha-oo has designs on the Earth’s oceans, as well as special plans for Laureline. While Valerian struggles with quantum commodities and finance, it is up to Laureline to save Earth–if she doesn’t strangle the Shingouz first.
Shingouzlooz Inc. contains all of the whimsy and humor of the core Valerian and Laureline series, and none of its subtlety. While some of this comes from extending the normal couple pages of Shingouz cameo into a book length story, much of the humor relies on puns, including the elusive quantuna fish and glaringly obvious foretelling in the Shingouz’s unsuccessful holding company–Shingouzlooz, Inc.. But the same lack of subtlety affects the story as well. Valerian and Laureline has never shied away from social issues, but Christin and Mézières show the effects of masculinity, femininity, greed, and corruption throughout the graphic novels and without resorting to lecture. Lupano instead uses a snide reference to ocean pollution to save the Earth’s seas and lets Laureline rant about colonialism like an ingenue on her way to university.
Perhaps the biggest loss, however, is Laureline’s most potent weapon–her charm. Her role has been to show that persuasion is preferable to action. In Shingouzlooz Inc., Laureline is angry enough to use Valerian’s direct methods exclusively. Granted, the loss of Earth to Sha-oo through such dubious circumstances as a poker game has everyone violently upset, but Sha-oo’s plans to recover his losses in acquiring Earth include selling thousands of limited edition Laureline waifu clones throughout the galaxy. So Laureline’s sudden bouts of violence are understandable. Meanwhile, and just as uncharacteristically, Valerian uses persuasion to bargain his way into securing the funds needed on his assignment.
If Lauffray’s Long John Silver (reviewed here) was a book of vivid reds and inky shadows, he imbues each page and panel of Shingouzlooz Inc. with brilliant blues–as befitting such an ocean-centric book. The character designs combine the classic look established by Mézières with the costuming and actors from the Valerian movie (reviewed here) into a more realistic look without resorting to the heavy linework found in Long John Silver. The result is an evocative homage to the classic series while still remaining distinct. I look forward to more works by Mathieu Lauffray.
At its heart, Shingouzlooz Inc. is a fanservice book. Not just in the alluring poses of the Laureline clones, each taken from panels of Christin and Mézières’ years of work, but in the art and story itself. Among the treats for fans of the comic book are the return of beloved characters, artistic homages to favorite scenes of the past, and the Laurelines’ outfits. Meanwhile, the character designs and Laureline’s sudden action girl turn are designed to appeal to fans of the Valerian movie. While the intertwining paths of Valerian and Laureline through Shingouzlooz Inc. are accessible to newcomers, fans will get more out of the resonances and references.
Posted by Nathan at 3:06 PM No comments: