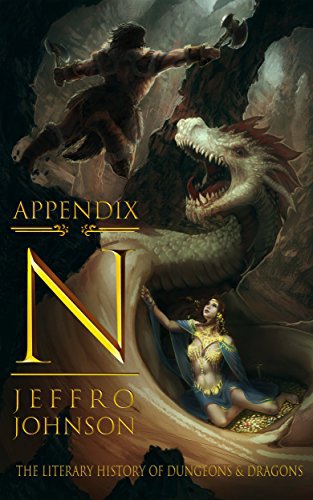 Today is a holiday for many in the writing circles I frequent, for Jeffro Johnson's much anticipated Appendix N: The Literary History of Dungeons & Dragons has been released at last!  A survey of the books that inspired the classic role-playing game, Jeffro's work has ignited renewed interest in the sword and sorcery fantasies that have been forgotten over the years. Originally begun as an investigation into how the tales of Conan, John Carter, and Fafhrd & the Gray Mouser influenced the mechanics of Dungeons & Dragons, it has become the cornerstone of the Pulp Revolution.

But don't just take my word for it:

From Alexander Macris, founder of The Escapist and creator of Adventurer, Conqueror, King:


Fantasy fiction can and does re-tell the same story endlessly because the story that fantasy re-tells is the best story - the mythic story, the story of the human experience with the sublime. But to do so, to re-tell the best story, the fantasy author must first know it, in its purest and most undiluted form. A chef who hopes to serve a fine meal must have eaten a feast of the freshest morsels, or he will not know what a fine meal is. One who has only tasted reheated and repackaged TV dinners cannot know the taste of better.

Learning the great story is a lifetime of effort and most of us come to it unprepared. We cannot recognize it when we see it. It is too rich for our blood. Howard, Leiber, Vance, Zelazny, Tolkien - all of them were closer to the great story than we are. When we read their works, we find ourselves closer to the fountainhead of the imagination, closer to the mother lode. There is an earnestness, a vitality, a vigor that has been sapped from their epigones. The success of Dungeons & Dragons has spread the beauty of fantasy everywhere, but in so doing it has spread it thin. Appendix N is the original sauce.


What Jeffro found when he defied the gatekeepers and delved deep into science fiction's "problematic" past was a lost canon of shared lore that every SFF fan would have been familiar with as recently as the 1970s. This genre-defining body of works now lies largely forgotten to the grave detriment of the field. With Appendix N, Jeffro lays the groundwork for a renaissance that affords science fiction the chance to recover its hidden roots.

Did you know that the line between science fiction and fantasy was once so blurry as to be almost nonexistent? That it was the books of Edgar Rice Burroughs, more than Gene Roddenberry's much later work, that inspired NASA scientists to put men on the moon? That a sci-fi generation gap divides the genre conceptions of new and old school SF fans?

Jeffro's exhaustive research uncovered these, and many more, astounding revelations. Now you can benefit from his tireless work and learn the secret history that the self-appointed guardians of science fiction don't want you to know.


Jeffro has indeed unearthed something. It is the hidden heritage of our beloved genres. I feel a little embarrassed, frankly, that I was so wrong about the fiction that I love so much. What I thought I knew about the genre was a series of walls and fences, put into place to guide me toward opinions and attitudes that were presented as things inevitable. There were few signposts in this landscape. There was the Campbellian stuff. Then came the New Wave, the fathers of Now. Before all that was the Dark Ages. The pulps. Only greats like Robert E. Howard and H. P. Lovecraft had the talent to last beyond that laughable and amateurish milieu. And though they remain, their work is forever tainted with the regressive ideas that lace their work. Hovering nearby, neither here nor there, was Tolkien. The source of all fantasy, so I was told. Beloved by millions, trashed by Moorcock and Brin and other forward thinkers, he sat always in the corner, a relic of the days of yore, reeking of pipe smoke and full of old fashioned ideas. Critics, editors, writers, and bloggers, all worked overtime to assure me that we were Almost There. The baggage of the past had given way to a new era where science fiction could finally be regarded as Important, as a force to fight for human progress, as a true literature worthy of critical acclaim in the loftiest towers of the sorcerers who produce taste and proper opinion.

That dragonfly frozen in amber, Appendix N, yielded a different story. My ideas and attitudes about the genre were changed irrevocably. For me as a writer, it could not have come at a better time. The variety and quality of Appendix N, the mashing of genres, the incredible breadth of works in the forgotten canon, it was all cool water to a man dying of thirst.

It’s not just me. Jeffro’s work has become a lodestone, pulling at a set of emerging and disparate writers. We are out there, creating what we want from influences as varied as Lord Dunsany and anime. From the maps he drew we are navigating rivers back to their sources. We are exploring myth and knocking the rust off old ideas like heroism and honor. Venues like Cirsova are embracing the pulp heritage with no caveats or apologies. We are creating our own markets and finding readers. The stones of shattered temples are repurposed, the building material for new cathedrals.

And all from curiosity about the origins of a game.