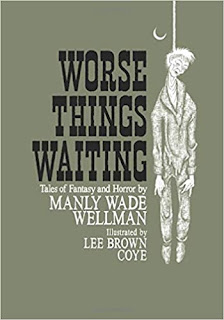 In 1950, towards the end of Weird Tales's run, yet just before his first John the Balladeer story, Manly Wade Wellman turned to the forest for inspiration for a ghost story, "The Pineys". For amid the dense longleaf pines lives a strange folk known as the Pineys, and those who trespass into their lands vanish. The Indians who once lived around this particular pine grove say that the Pineys were there first. Some even say that the Pineys have been defending their groves since before the dinosaurs, and that their king walks among humanity, ever vigilant for those who would disturb his pine groves. What is clear, as many who live uneasily around the pines repeat, is that no one knows what the Pineys do to those who they capture.

Nothing but tall tales and campfire scares, right?

Beau Sawtelle believes so, and it is his job to survey the piney grove for logging. He's brought his niece, some men, and a local named Mac to assist him. The local tales of strange and furred creatures don't scare Sawtelle's party, but rather provide a bit of amusement as they journey deep into the forest. But as the canopy darkens overhead and the shadows grow longer, the discussion takes a more fearful turn as they discuss the Pineys' king while they make a campfire...

Some stories just ache to be told out loud, and this last gasp of a Gothic tale, stitched together from campfire recollections and short tales, sounds like the stories told late at night by a storyteller aiming for a little mischief. As mentioned, this is a ghost story, so the impact rests on the final revelation, heightened further by whom the narrator is.

All the hallmarks of a proper Wellman tale are present. Mac's voice is reminiscent of John the Balladeer, who would appear in "O Ugly Bird" a mere three months later. The Pineys themselves fit the inventive bestiary that fills Wellman's tales, and he even draws a distinct parallel to the Shonokins, a race that filled several of his earlier Weird Tales. And finally, Sawtelle's niece relies on the same European folk magic and grimoires that John the Balladeer would use to great effect in his short stories. It's easy to see "The Pineys" as a sinister rehearsal for what would John's adventures, more so that "Frogfather" or "Sin's Doorway". Just call Mac "John..."

"The Pineys" may be a simpler scare than the heyday of Weird Tales under Farnsworth Wright, but atmosphere and voice can make even the simplest tales breathe with sinister life. Fortunately, the most affordable place to find "The Pineys" is in the new reprint of Worse Things Waiting, which is still available through Amazon.
Posted by Nathan at 5:02 PM