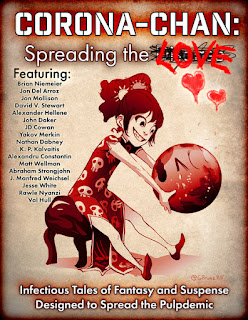 The Corona -Chan anthology has a surprise for fans of Brian Niemeier's Combat Frame XSeed series. Among its many stories lies the first XSeed story published. Called "Anacyclosis", or, perhaps more fittingly renamed in the series' current nomenclature, CY 73, it is a more contemplative story, befitting its first publication in the Sci Phi Journal nearly five years ago. As such, it offers a glimpse into the history of the XSeed universe between CY40: Second Coming and the recently announced XSeed S. And for those who might be confused by the seemingly random string of letters and number, that means war and giant robots.

Humanity is locked in a long stalemated war against the Ynzu, a race known for exterminating everything in its path. Yet despite frequent losses, humanity has still spread to the stars. Above one colony, mecha pilot Kob Agur is about to learn the cost of his monomania: immortal glory earned by fighting the Ynzu.

Kob is the typical anime protagonist; determined, skilled, and utterly clueless with the ladies. His brusque refusal of a co-worker's advances sets the stage for how his obsession with glory brings death all around. The disasters around Kob spiral, from doomed wingmen, to destroyed carriers, and razed colonies. But when the cold embrace of space is about to claim his drifting combat frame, Kob is discovered by a hidden settlement filled with strange monks obsessed by collecting the computerized memories of Witnesses to history, including many of the leaders of the original XSeed novel. Once Kob awakens, he is tested to see if he might join this immortal archive.

Given the tendency towards violent death in XSeed, one wonders how so many characters' memories were captured. Perhaps it is something to do with the XSeed combat frames' computer systems. Or maybe the technology is similar to the Rimway AI simulations in Jack McDevitt's Alex Benedict novels. What is soon clear, however, is that Kob's nature will claim more victims.

Kob's fate is a darkly ironic take on the typical anime protagonist, and an inversion on the typical plot armor granted by determination, skill, and cockiness. Some would say more realistic, but the same traits that doom Kob are rewarded elsewhere in the XSeed series. Not all who are named Destroyer bring ruin to their enemies.

Briefly considered in the story is the possibility that humanity might have beaten the Ynzu, in a future far away from CY 73. However, there is no hint to the gnarled path that might lead humanity to that destiny. And with two novels remaining, that will undoubtedly be a rollercoaster full of switchbacks before readers see that future. But while we wait, "Anacyclosis" is a splash of Soul Cycle contemplation between thrill rides.