The Moon Man: The Sinister Sphere 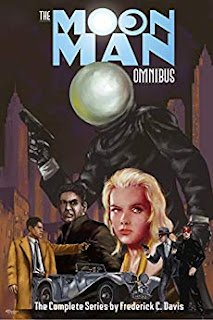 "A figure crept into the dark room.

"From side to side it turned its head, a head that was a perfect sphere of silver.

"If the silent figure had any face at all, it was the face of the man in the moon!"

The Moon Man straddles the line between hero pulp and detective story. His glass globe mask certainly has the flamboyance of the hero pulps, but the Moon Man is instead a classic gentleman thief trying to outsmart his own set of nemeses as he steals from criminals to give to the poor. The Moon Man fills the fantasy of those who want restitution for the victims more than unwavering vengeance.

Like with The Whisperer, we have a chance to see the man behind the mask: Detective Stephen Thatcher. His double life is a key feature of the story. His father is the chief of police, his partner and best friend is assigned to arrest the Moon Man--and the father of his fiancee. As the Moon Man, Thatcher constantly worries that his identity will be compromised, whether by breaking his cover or by breaking the fragile glass mask. But as long as there are victims harmed by crime, he will do his best to bring justice and end their hardships.

In "The Sinister Sphere", by Frederick C. Davis, the Moon Man's latest robbery of a mere $650 is interrupted, and the masked man leaves behind a glove--and a fingerprint. Now Thatcher has to lay false trails for his friend and his father, even as he plans for his next caper. In the classic fashion of a gentleman thief, he announces his next target by letter.

Now Thatcher has to make his theft under the watchful eye of his partner, while, unbeknownst to everyone, his fiancee starts poking into his organization. Will the Moon Man escape with the money?

Of course. But he didn't expect his fiancee to try a citizen's arrest at gunpoint!

"The Sinister Sphere" is mostly a structural story, setting up the Moon Man, the glass mask gimmick, his helpers and foes, and the complex relationships of a gentleman thief hiding in the open. So the actual caper is serviceable, but nothing special. The main allure lies in whether Thatcher can juggle the deceptions needed when his very family is dedicated to the Moon Man's capture. And, in the first appearance, he is able to. But the webs of deceit will tighten around him as the series progresses.

While Davis is a Black Mask alumnus, his prose here owes more to The Shadow than the "Hemmingway" style of Hammett, perhaps written with an ear for radio or with an homage to classic gentlemen thieves like Fantomas. But the ornamentation does not get in the way of the thrill of the heist and the thrill of the chase.

All in all, "The Sinister Sphere" is a nice B-side chance of pace to the more familiar hardboiled and hero pulps.
Posted by Nathan at 3:03 PM