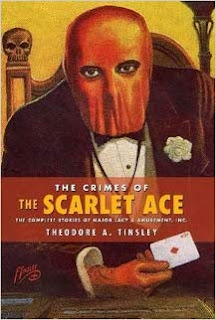 What if Doc Savage and bros. took on the mob with actual bullets? Let's find out in Theodore Tinsley's "Amusement, Inc."

The back story of "Amusement, Inc." is as interesting as their tales. Few people would actually believe that six millionaires would band together to fund an attempt to clean out the crime from a major city. It makes for great fiction, but unbelievable newsprint, yet, in the months before "Amusement, Inc." and Black Aces appeared on the stands, one such organization, The Secret Six, was revealed in Chicago as instrumental in bringing down Al Capone. Of these millionaires, Eliot Ness said:


"These six men were gambling with their lives, unarmed, to accomplish what three thousand police and three hundred prohibition agents had failed miserably to accomplish: The liquidation of a criminal combine which paid off in dollars to the greedy and death to the too-greedy or incorruptible."

That "Amusement, Inc." would use this story should come as no surprise. Chicago's crime scene and the longing of its citizens for justice left a lasting mark on the pulps--"Words do not count—deeds are their own explanation." And justice in the pulps was swift, violent, and final, as befitting the cries of a populace near their breaking point with violent crime.

Tinsley uses his version of the Secret Six as the money behind the muscle that will be known as Amusement, Inc.

"I'm offering you danger and death to play with by day and night."

How's that for a job offer? But crime is everywhere. One murder attempt later, and Major John Lacy is brought before the Emergency Council of six millionaires trying to clean up the city. Out of this meeting, a secret society grows, and the front organization: Amusement, Inc. To staff his amusement, Lacy draws upon the old soldiers' network to assemble a squad from his old unit--and an armory's worth of weapons.

Amusement, Inc. will need all the guns, too, as one of the Emergency Council's banks is targeted by arsonists for having the gall to refuse a racketeer's loan demand. These "torch bugs" are wanted dead...just dead. Alive is not an option.


"I'm not cop, you fool--I'm a death warrant! You'll talk fast to me or you'll burn in your own grease!"

Just a reminder that Major Lacy, for all his incorruptible strengths, is not John Law, nor is he paid to deal kindly with torch bugs and other thugs. Leaning on the rats compels them to give up the name and location of the racketeer who ordered the blaze. A few bullets later, and the first blow against crime is struck.

It's a pity that the bank burned down, though.

Certain pulp heroes like Doc Savage might instead chose rehabilitation, but the men of Amusement, Inc. are there for adventure--and vengeance.

"Amusement, Inc." is the pulp equivalent of an action movie, running from murder attempt to city chase, from explosion to gunfight. There's little investigation here, just action. And if you want to survive a gang war, you'd better have a gang of your own.

Like the rest of Black Mask's alumni, Tinsley's prose still sounds contemporary nearly a century later. The characterization is a bit scant, but this isn't about the men of Amusement, Inc., it's about the criminals terrorizing the cities getting their just and violent end. Amusement, Inc. is just the instrument of destruction.
Posted by Nathan at 3:18 PM