Jack Williamson's career in science fiction is long and distinguished, starting with his first story, sold to Hugo Gernsback in 1928, and enduring into the 21st century. He is perhaps best known for his Legion of Space. And, to be fair, I wish my introduction to him was there.

Instead, curiosity got the better of me when I saw "The Iron God" in SFFAudio's Public Domain files. The combination of dive bombers attacking a metal giant and a science fiction story published in Marvel was too much to pass up.

Unfortunately, time has not been kind to "The Iron God", as its hopeful optimism, mad science, and star child tropes have been ground into dust over the resulting seventy and more years of science fiction magazines, books, and drive-in movies have copied the same themes and plot elements. And the sea change that accompanied post-modernism shifted views about science away from the path to a rosier dawn towards the leading suspect of who will kill our tomorrows. From that vantage point, the clumsy attempt of a mad scientist to create a New Man who would not heed the Old Lies serve more as a warning against secret kings than a reproach of a species that kills what it doesn't understand.

That said, the reason "The Iron God" does not shine has more to do with the dross that followed it than it's own faults. At best, it is average. Really, the radioplay of the doomed dive bombers is the highlight.

Pulp fiction's fascination with Colonel Percy Fawcett continues, as the mad scientist father of the Iron God disappears into the South American jungles. However, it has changed from men of action and science like Doc Savage into brilliant lab rats content with mere moral victories.

I'll try Williamson again, as his presence inspired and shaped much of traditional science fiction since before the Campbelline Age. But this time, I'll stick closer to the beaten path 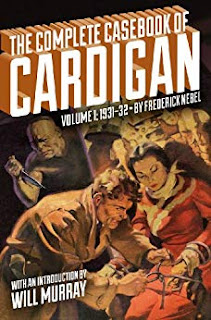 Black Mask alumni Frederick Nebel's Jack Cardigan was one of the main reasons behind the success of the legendary Dime Detective Magazine. Cardigan first appeared in, "Death Alley."

This is a tale for jazz and bourbon. Cardigan's partner is dead--done in by drive-by--and the case is apparently closed. Only Cardigan believes otherwise. It doesn't take long for Cardigan, P. I. to find trouble, both with the crooks and with the law. Said trouble sends the rest of his private detective office into the hospital. After all, St. Louis is a rough city--and a blissful change from New York or Chicago.

The familiar hand of Lester Dent's Master Formula can be felt guiding events. Cardigan gets dropped into one peril after another, and not all he can fight his way out of. The murders of the detectives cross over with a spot of trouble that a newly widowed heiress finds herself in, drawn together into one final standoff, and a public gunfight.

"Death Alley" truly is a perfect four-chapter execution of Dent's formula, awash in gin, whiskey, and tobacco smoke. Compared to the more adventurous Race Williams, Cardigan actually has to rely on some proper sleuthing--and an ability to ferret out connections as tenuous as smoke. It isn't noir, Cardigan is never tempted and is instead vengeance personified as he searches for the killer, but you can see it from here.

There's something about Black Mask writers that, even when riddled by slang now long out of date, their prose has a freshness to it that the 1930s hero pulps and 40s science fiction lack. Even when the hard-boiled stories are dated, they aren't. Nebel is no exception. That's not to say that I didn't have to rely on a dictionary a click or so away for a couple terms. But in the end, with the required and satisfying twist, I want to see this done on the silver screen in proper black and white.
Posted by Nathan at 3:24 PM