Pre-Tolkien Challenge: The Abominations of Yondo 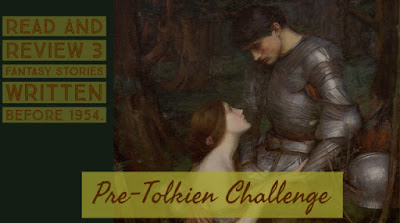 I selected Clark Ashton Smith as part of my Challenge readings, not only because he was one of the three pillars of Weird Tales, but also since he was one of the writers in the American tradition of fantasy that brought forth H.P. Lovecraft. Thanks to Campbell's Unknown and the explosion of Tolkien copycats, this American tradition of weird fantasy has been relegated to pastiche and parody. Smith's "The Abominations of Yondo", his first short story, shows what's been lost along the way.

An unnamed narrator recounts his journey into the desolated deserts of Yondo, a region at the edge of the world-rin ruined by exposure to the Great Beyond:

I will not detail the indiscretions which had led me, a careless stranger from far-off lands, into the power of those dreadful magicians and mysteriarchs who serve the lion-headed Ong. These indiscretions, and the particulars of my arrest, are painful to remember; and least of all do I like to remember the racks of dragon-gut strewn with powdered adamant, on which men are stretched naked; or that unlit room with six-inch windows near the sill, where bloated corpse worms crawled in by hundreds from a neighboring catacomb. Sufficient to say that, after expending the resources of their frightful fantasy, my inquisitors had borne me blindfolded on camel-back for incomputable hours, to leave me at morning twilight in that sinister forest. I was free, they told me, to go whither I would; and in token of the clemency of Ong, they gave me a loaf of coarse bread and a leathern bottle of rank water by way of provision. It was at noon of the same day that I came to the desert of Yondo.

So far, I had not thought of turning back, for all the horror of those rotting cacti, or the evil things that dwelt among them. Now, I paused knowing the abominable legend of the land to which I had come; for Yondo is a place where few have ventured wittingly and of their own accord. Fewer still have returned - babbling of unknown horrors and strange treasure; and the life-long palsy which shakes their withered limbs, together with the mad gleam in their starting eyes beneath whitened brows and lashes, is not an incentive for others to follow. So it was that I hesitated on the verge of those ashen sands, and felt the tremor of a new fear in my wrenched vitals. It was dreadful to go on, and dreadful to go back, for I felt sure that the priests had made provision against the latter contingency. So after a little I went forward, singing at each step in loathly softness, and followed by certain long-legged insects that I had met among the cacti. These insects were the color of a week-old corpse and were as large as tarantulas; but when I turned and trod upon the foremost, a mephitic stench arose that was more nauseous even than their color. So, for the nonce, I ignored them as much as possible.

The story is simple, but like all simple things, the quality is in the execution. Smith writes a dense prose equivalent to a tone poem, where each paragraph evokes new horrors through multiple senses. The careless would call this prose purple, but Smith is painting revulsion with words. The current fashion of one sensory word a page is not enough to create the dread required. Like with John Wright, a dictionary is a must with Clark Ashton Smith, and just as rewarding.

Smith is as profligate with description as modern fantasists with history and back-story. By focusing on sensation and mood, he immerses readers within paragraphs, where present-day writers require chapters. And thus Yondo is more memorable than the Three Rivers, Elantris, or Camorr, despite the chapters' worth of words spent on each.

Writers should study Smith's descriptions, while readers can enjoy an eerie tale of an unknown that should rightly be feared, with shivers that grow stronger when read aloud.