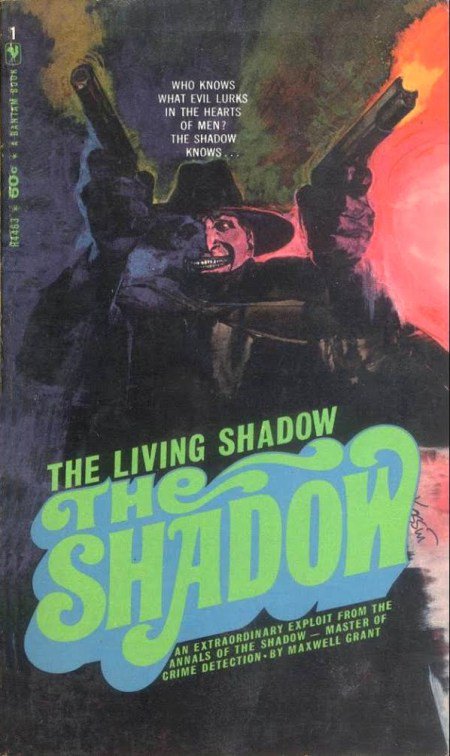 Out of the darkness came a being of the night to give Harry Vincent another chance; a chance to live his life with enjoyment, danger and excitement; a chance to risk it for an honorable cause in the service of the mysterious character known only as The Shadow!

Far be it to me to add one jot to the advertisement for the very first novel of The Shadow, 1931's The Living Shadow, especially when it sums up the events so well. Written by Walter Gibson under the house name of Maxwell Grant, this novel would create new genres, from the hero pulps to superhero comics, and usher in the media empire that was The Shadow.

Yet for how ubiquitous the Knight of Darkness would become, his first case begins not with the narrative eye on Kent Allard, Lamont Cranston, or whatever nom de guerre The Shadow claims as he fights his war against crime. Instead, we are introduced to Harry Vincent, a man who had just received a "Dear John" letter from the woman who used to be his girl back home. Overtaken by a pity party, he heads out to a bridge and jumps. But his suicide is not to be...


Something clamped upon his shoulder. An iron grip held him − balanced between life and death. Then, as though his body possessed no weight whatever, the man felt himself pulled around in a sweeping circle. He staggered as his feet struck the sidewalk of the bridge.

He turned to confront the person who had interfered. He swung his fist angrily, but a hand caught his wrist and twisted it behind his back with irresistible power.

It was as though the man's strength had been wrested from him when he faced a tall, black−cloaked figure that might have represented death itself. For he could not have sworn that he was looking at a human being.

The stranger's face was entirely obscured by a broad−brimmed felt hat bent downward over his features; and the long, black cloak looked like part of the thickening fog.

This mysterious stranger demands a price for Harry's rescue:


"Your life," said the stranger's voice slowly, "is no longer your own. It belongs to me now. But you are still free to destroy it. Shall we return to the bridge?"

"I don't know," blurted Vincent. "This is all like a dream; I don't understand it. Perhaps I did fall from the bridge, and this is death that I am now experiencing. Yet it seems real, after all. What good is my life to any one? What will you do with it?"

"I shall improve it," replied the voice from the darkness. "I shall make it useful. But I shall risk it, too. Perhaps I shall lose it, for I have lost lives, just as I have saved them. This is my promise: life, with enjoyment, with danger, with excitement, and − with money. Life, above all, with honor. If I give it, I demand obedience. Absolute obedience. You may accept my terms, or you may refuse. I shall wait for you to choose."

Harry instantly agrees, and the man ushers him into a taxi which will take him to a hotel that will provide him food, lodging, and clothing--and a way to recieve this man's future orders. Along the way, though, some highwaymen force the cab off the road. They attempt to rob him, but get only lead from the mysterious man's pistol

So far, The Living Shadow is relatively straightforward, using Harry's plight to hook the reader on who this mysterious rescuer might be. It even ends with a quick action sequence, that, from Harry's perspective, is akin to a thriller movie where a person can hear fighting outside, but only occasionally sees the combatants when they crash against the glass. This fight is both suspenseful and economical, accomplishing its mission in four paragraphs.

Already the difference in story telling fashion is apparent. With the success of Star Wars, the monomyth structure known as The Hero's Journey has become ubiquitous. Certain beats, like the Call to Adventure and Refusing the Call are now expected and expected to fill the first quarter of the adventure. The Living Shadow breezes through this phase in the first 1200 words, tossing the idea of Refusing the Call out the window in the process. Not only is The Shadow that convincing, his adventures were written in a time where writers were relatively unconcerned with delving into the motivations and reasoning of making a decision. Instead, they focused instead on exploring the consequences of a decision, as was expected in a morality play. Good intentions could lead to bad results, and bad results were the effect of a poor decision. Thus Harry leaped at the opportunity given to him. We will see if he made the right choice in the next 36 chapters.

But it is also important to remember that Harry Vincent is not the hero of The Shadow. He's just the protagonist and occasional viewpoint character. At the dawn of the hero pulp, Walter Gibson introduced the idea of a proxy hero. And while The Shadow's methods, agents, mysteries, and stories were copied by his imitators in both the hero pulps and superhero comics, few copied this device. Walter Gibson explains more in "A Million Words a Year For Ten Straight Years":

You must treat your character as a discovery, rather than your own creation. Treat him, not just seriously, but profoundly. Picture him as real, and beyond you, in mind as well as prowess. Feel that however much you have learned about him, you can never uncover all. This mental attitude gives you a deeper knowledge of the character than the story itself discloses.

The plot induced by this process will normally require a lesser character who may be termed the "proxy hero." He is the person, along with others like him, who is matched against the villains of the piece, in a theme which is really the personal saga of that all-important lead character, who is developed through his influence and action towards the lesser figures.

The proxy can be replaced by another, even from the wrong camp. The unity lies in the lead character's identity with the plot. When incidents and situation are fed to him, they are used or rejected, according to how they rebound to the writer.

Harry is but one of The Shadow's agents, and is here used to start filling in the mystery of just who The Shadow is. A similar demonstration can be seen in Tim Burton's Batman, where Vicki Vale is used to introduce and then explore who Bruce Wayne is--and who is the Batman. The Living Shadow keeps the focus tight on Harry Vincent, though. And when perspective jumps to The Shadow, he is just as reticent to reveal anything about himself as any other time.

Who had been wounded − the shadowy stranger or the assailant who had tried to enter the limousine? Vincent could not guess; he only knew that in the brief struggle the man who had found him on the bridge had left the automobile − unseen and unheard − and the door had closed behind him.