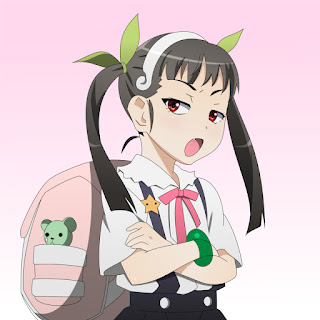 If you've read my review of Bakemonogatari Part 01 over at Castalia House, you'll know that I am not a fan of "Mayoi Snail." Not only do I find it a slow story hobbled by Koyomi's need to be clever and the long wait for Hitagi to return with the solution to Mayoi's mystery, I have long grown tired of the anime tropes that pop up here, specifically lolicon, skinship, and pain paying for wandering hands. The pulp mystery behind "Hitagi Crab" is more to my tastes. However, some of my criticism of "Mayoi Snail" is because I didn't completely understand the story.

This is no fault of translator Ko Ransom, I found the translation job to be excellent, delightfully lacking in the fetishizing of the Japanese language often imposed on works by the expectations of anime and manga fans. Furthermore, there wasn't the funny word order that often comes from literal and direct translation of Japanese grammar, as I have seen time and time again in fansubs and fan translations of light novels such as A Certain Magical Index and The Melancholy of Haruhi Suzumiya. Rather, as a foreign reader, I did not recognize the Chinese-influenced structure of the story, known in Japanese as Kishotenketsu.

Originally developed in Chinese four-line poetry, the kishotenketsu form was adopted by narrative story and even formal academic essay. For those familiar with Japanese visual culture, the 4-koma, or four panel comic strip, represents the most familiar application of kishotenketsu structure. Whether argument or gag strip, the story is divided up into four parts:


The introduction: The characters, setting, and situation are introduced.

The development: Themes and events in the introduction are built upon and developed in more depth.

The twist: An unexpected event illuminates everything that happened before in a new light.

The conclusion: Not only does this wrap up the dilemma of the story, it explores the consequences of the twist.

This allows a story to be told without the overt conflicts inherent to Western structures, most of which originate in Classical Greek theater. Because of this, kishotenketsu structure is the main structure in slice-of-life anime (Azumanga Daioh, K-On!, Hidamari Sketch, etc.), and can be seen in many of those shows' roots in 4-koma comics.

Kishotenketsu can be applied to "Mayoi Snail" as follows:


Introduction: Koyomi and Hitagi are in a large park, where they see a lost girl, Mayoi.

Development: Koyomi tries to help Mayoi find her home, but no matter how long or how far they go, they never find it. Hitagi is worried about an aberration affecting Mayoi and leaves for help. Tsubasa appears, scolding both Koyomi and Mayoi.

Twist: Hitagi returns, telling Koyomi that not only is Mayoi the aberration, she had not once been able to see Mayoi. Only those who are unhappy can see a Lost Snail aberration.

Conclusion: Hitagi and Koyomi are able to return Mayoi to her house, ending the effect of the aberration on the ghost girl. Koyomi comes face to face with some of the issues in his life - and the fact that Tsubasa's unresolved unhappiness is a ticking time bomb.

With this greater understanding of technique, "Mayoi Snail" does rise a notch or two in my esteem, but not enough to displace "Hitagi Crab" as my favorite Bakemonogatari short story.
Posted by Nathan at 8:57 AM