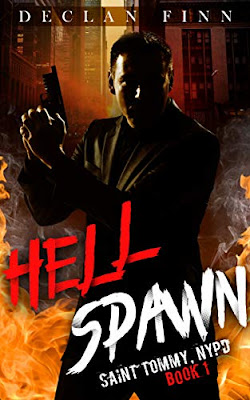 A godly, almost saintly, detective must hunt down a demoniac serial killer in Declan Finn’s Hell Spawn, the first novel in the Saint Tommy, NYPD series. Billed as Catholic action horror, it provides a thoroughly Christian backdrop for a police thriller that straddles the line of urban fantasy.

So, how does Hell Spawn work as a Christian novel? To be honest, it’s a bit of a failure. Where’s the shoehorned salvation scene? The cutaway to souls in Hell? The ecumenical approach to doctrine? The 1990s This Present Darkness angel and spiritual warfare retreads? The sanitized approach to violence and evil? Where are the sermons?

Granted, for many readers, the absence of the above is not a failure, but a roaring success. The clichés that killed Christian publishing aren’t here. There isn’t enough room for such silliness between the two-fisted action and hard-nosed detective work. And Finn writes in a consistent and unabashedly Catholic view of the universe, instead of the nondescript non-denominational pabulum served up by a Christian publishing industry that’s almost certainly run by its enemies. Tommy Nolan acts consistent with the beliefs and practices of the faithful Catholic, albeit in a muscular manner that shows that Good doesn’t mean goody-two-shoes. That also means that Nolan faces demons in a manner consistent with Catholic practice, and not the confrontations more familiar to those influenced by Pentecostal portrayals. Think more prayer, priests, and holy water than commands, confrontations, and orders.

But most importantly, Finn is writing an adventure instead of a parable. How would a current-day saint stop a demon who is possessing serial killers? There is not time to discuss lengthy discourses on doctrine or popular passages on world-building and mythology* when Tommy is racing a serial killer intent on butchering everyone close to Tommy. And thankfully, Finn refuses the modern cliché of requiring Tommy to violate his beliefs to get the job done. The real puzzle is in how good men remain good in an evil world that the good cannot exile themselves from, not the defeat of good men to temptation or the appearance of superficial contradictions. So Tommy’s faith and goodness remain unflinching.

So does Hell Spawn‘s portrayal of evil. Serial killers murder in grisly ways that make Hannibal in Silence of the Lambs appear uncreative and pedestrian. Hell Spawn doesn’t glory and wallow in the gore, rather, it is honest that some people delight in committing terrible acts. Finn also address some of the moral evils of the time without stepping into the current swamp of Left and Right. And even more disturbingly is that the evils described in Hell Spawn take a more harrowing turn in the years after it was written, particularly with the arrogance of those who think they are getting away with crimes and the rise in gang violence. There also is no allure, no seductiveness around the dark and evil things common to contemporary urban fantasy.

But all these points are Second Things, and dependent upon one major First Thing: if the clash between the Saint of Detectives and a demoniac serial killer is actually thrilling. And while the plot relies a little too much on the current idea that a hero’s personal stake in the conflict is more important than other considerations, Tommy is a likable hero thrust into an uncommon and escalating peril. And, while the outcome may be assured, the delight is in discovering what bit of cleverness Tommy needs to pull through what is the first of many trials against Hell itself.

I was planning on reviewing the sequel, Death Cult, as Jon Mollison already reviewed Hell Spawn for the Castalia House blog. But who wants to dive into a series part way through? And, from the first page, I was hooked. Hell Spawn and Saint Tommy are welcome surprises among the glut of black leather and narcissism filling the urban fantasy landscape.

*I am loathe to call anything related to Christian doctrine mythology, but most novels that deal with the angelic and the demonic inevitably spend considerable wordcount developing arguments about how many angels can dance on the head of a pin and of what denominations and contradictory religions they might belong to, whether in Christian or secular books.