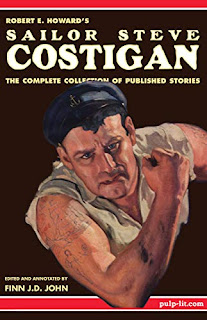 Robert E. Howard is best known for his sword and sorcery tales, and his heroes Conan and Krull. But Howard wrote more stories of Sailor Stevie Costigan than any other of his heroes with the exception of Conan. Costigan was a sailor in the Pacific, hot-headed, quick with his hands, and the fiercest boxer on the seas. Accompanied by his bulldog Mike, Costigan moves from port to port and ring to ring, avenging slights and proving naysayers wrong. Unfortunately, this means that Costigan takes lumps that a few moments’ hesitation may have prevented, something the old salt good-naturedly admits.

In “Sailor’s Grudge”. Steve Costigan’s troubles start where most sailors’ do, on shore, and this time in California. A chance meeting with a little blonde flirt named Marjory puts Steve’s heart into a flutter. When he finds a man named Bert browbeating Marjory for fancying a sailor, Costigan enrages. Not only will no man get between Costigan and his current fancy, Steve pegs the man as a fellow sailor. The ensuing grudge will take Costigan into Hollywood, where he assaults a Bert lookalike that turns out to be a famous actor, one to whom Bert is a stunt double in a boxing movie. Costigan muscles his way onto set, aiming to settle his grudge in the ring, recorded by the movie’s director. But will this production have a happy ending?

Not when Steve learns the real connection between Marjory and Bert.

Costigan retells this misadventure knowing that the joke is on him, and that this white knight was tilting at windmills of his own devising. Howard nails the voice convincingly and appropriately for a lighter tale than the Gothic-tinged fantasy he is better known for. Better yet, he does it subtlely, using a few choice words here and there instead of the thick and occasionally unreadable accents many of his contemporaries used in the name of “realism”. The result is a quick, even friendly read that speeds the reader along to the highlight–the fight.

The fighting is painted in broad strokes. Technical, as an experienced boxer might, but with an eye towards how the fight fits in Steve’s attempts at courtship. Verisimilitude is the name of the game. Just enough boxing jargon to preserve Costigan’s expertise in the ring, but not so much that it turns into the Dreaded Checklist of Action or to stall the story’s narration. The punches mentioned move the story forward, not to wallow in technique, and each punch moves Steve closer to the realization that he doesn’t have a puncher’s chance with Marjory.

While Conan and Solomon Kane are classics of the fantasy genre, Costigan’s voice and the approachable nature of his adventures make his tales my current favorite of Howard’s works.