From Dan Wolgang, myself, and a half-dozen other contributors comes another recommended reading chart, this time for Light Novels 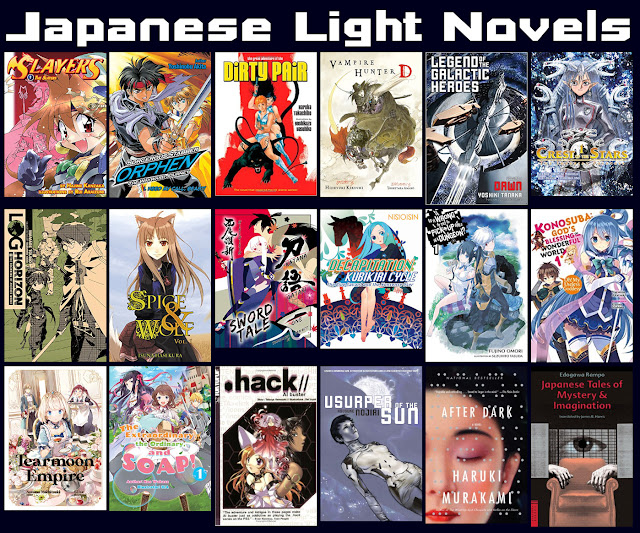 Many popular titles are absent for various reasons. Some, like Re: Zero, Overlord, and The Saga of Tanya the Evil, I just haven't read yet. For others, check out the reasons below.

Bakemonogatari: Clever writing marred by its embrace of the worst excesses of fandom.
The Melancholy of Haruhi Suzumiya: Collapsed under its ambitious kudzu time-traveling plot. A new novel is due to be released in November. Let's see if the author has figured out a resolution during the ten-year break.
A Certain Magical Index: No matter who translates it, the prose is rougher than a cheese grater. Watch the anime. It's an improvement
So I'm a Spider, So What?: Quickly abandoned the premise that made it stand out. Instead of following the charming adventure of a spider in a fantasy world, it tries for a paint-by-numbers epic fantasy. And the spider becomes human.
My Next Life as a Villainess: Too wrapped up in geek cliche, and some of the questionable ones at that. Worse, the pacing was too fast for the opportunities given by two years in a magical academy. Imagine the last three Harry Potter doorstoppers compressed to a pocketbook.
The Rising of the Shield Hero: The strong, character-oriented first volume fizzles into a meandering and aimless story.
Full Metal Panic - Another beloved series better served by its adaptations than its source material. Watch the anime instead.
Posted by Nathan at 8:55 AM