All Routes Lead to Doom: The Princess Improvement Genre 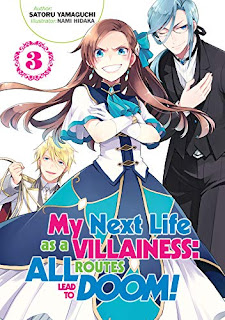 Somewhere in the vast multiverse that makes up the worlds of fiction, a spoiled brat of an eight-year-old princess is about to bump her head. The blow knocks more than a little sense into the girl, for it will gift her with knowledge of her impending execution as an adult. This may be granted through isekai shenanigans or strange forms of reincarnation, but one thing is certain. If the princess is going to see her eighteenth birthday, she is going to need to change. Slowly, the self-absorbed little brat opens up to others and discovers that she can make a better fate by growing involved with and helping others around her.

It's a simple premise, but one of growing popularity in Japan. These princess improvement stories also serve as a strange contrast to the everpresent "The Princess Saves Herself in This One" titles common in American stores. For in these light novels, the girls learn the soft power of inspiration, devotion, and persuasion as opposed to the sword and other accouterments of the action girl. After all, who is more powerful, the one who acts or the one who can move a hundred to act in her place?

Yes, these princess improvement fantasies are still feminine power fantasies. But they are fantasies of feminine power, of living up to the stories of fairy tale princesses, of persuasion instead of fists, and selfish girls faking virtue until they make it.

There's a strange undercurrent to recent Japanese light novels, both those aimed at boys and at girls. Compared to the many idealized young women in these fantasies, the portrayal of Japanese girls is almost disparaging. Readers could be forgiven for mistaking these brash, immodest, and self-absorbed girls who turn the attitudes of all around them against them for Americans. One could chalk this up to a form of frustration in the male-aimed light novels, but the portrayal exists in girls' shoujo light novels as well. Perhaps the princess improvement novel came about with trying to figure out how to make a selfish wastrel into a good girl. But how to get through to a character who only pays attention to herself?

The threat of death does focus the attention wonderfully. But, as in all fairy tales, that dragon eventually gets slain. Even if the plans are overcomplicated and occasionally obsessive.

Generally, the main characters of a princess improvement story are comfort seekers so caught up in their own delights that they lose their security--and then their lives. But by concentrating on their security, they find even greater comforts than sweets and soft clothes. And by helping others, these girls help themselves. These books are illustrations that no woman is an island and of C. S. Lewis's "First and Second Things" wrapped up in a fairy tale package that owes more to Cinderella than to The Tale of Genji. 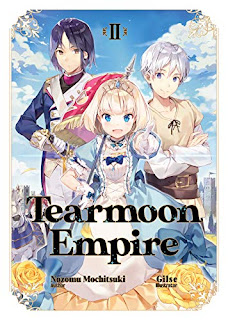 Of course, such feminine fantasies are full of romantic misunderstandings. Your tolerance for such may vary. And the girls tend to no longer act like children after they first get some sense knocked into them. So it is more than a little disorienting to watch a child act like an adult.

The best known is My Next Life as a Villainess, by Satoru Yamaguchi, thanks to a recent anime adaptation. Katarina's naivety is charming, but her misadventures in a magical academy are too quickly resolved. As the genre codifier, My Next Life as a Villainess inspired many imitators, such as Deathbound Duke's Daughter and I Refuse to be Your Enemy. Each one has pushed the genre further into its Western fantasy trappings. Deathbound Duke's Daughter, for instance, features detailed and loving descriptions of magical wands that could only be written by a Harry Potter fan.

The best of the genre, though is Tearmoon Empire, by Nozomu Mochitsuki, which completely removes the story from the previous trappings of the anime/manga/light-novel sub-culture. Its heroine Mia might not change her spots that much, preferring the fake-it-until-you-make route to Katarina's more Damascus-style moment. However, there is a surprising amount of depth unexpected in a light novel, and little snippets of wisdom for the reader to glean. Tearmoon Empire masters the old adage that before you can educate, you first must entertain, so the smuggled proverbs and misunderstandings in Mia's favor never seem like the dreaded lecture one expects in a self-improvement book.

It is good that the princess improvement novels are displacing the tales of burned-out salarywomen. And if they inspire a reader to improve herself, so much the better.
Posted by Nathan at 4:25 PM