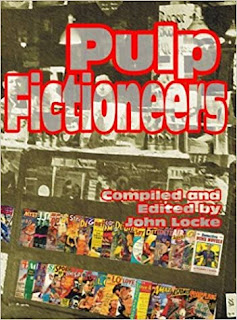 2004's Pulp Fictioneers, a collection of Writer's Digest columns reprinted by John Locke, contains a wonderful little essay on the state of science fiction by Amazing Stories editor Jerry K. Westerfield. Entitled "The Sky's No Limit", Westerfield's January 1940 column gives rare circulation figures, a who's who of pre-Campbelline science fiction (Edgar Rice Burroughs, John Taine, Abraham Merrit, and Ralph Milne Farley), advice to the would-be science fiction writer that sounds might familiar to the isekai light novel fan, and even an overly charitable explanation of the Michelist controversy of the first WorldCon. (Westerfield notes that most of fandom resented the intrusion of Michelist politics.)

Westerfield also spent a few paragraphs to describe Amazing's top writers. Number one was Eando (Otto) Binder, now best known as Supergirl's creator and the writer of many of Captain Marvel's best adventures. (That's DC's Shazam!, not the much embattled Marvel character.)

Number two, however, was a surprise:


Manly Wade Wellman runs Binder a close second by pounding out some 200,000 words of science fiction a year which amounts to $2,000. Like Binder, Wellman loves science fiction and makes it his specialty. He gets some of his plots from our old-time wild west, revamps the location to that of a savage planet, and presto he has a science fiction yarn. Wellman, a former newspaper reporter, got his first taste of science fiction when he wrote a propaganda story in which he pictured Martians as friends instead of enemies. The yarn brought him such a large letter response that Wellman has been doing pseudo science yarns ever since. He feels that most science fiction writers don't put forth their best efforts and most of their stuff is dine too hurriedly--including some of his own work.

It is a bit bizarre to see Wellman treated as a science fiction writer, given that he is now best known for his Weird Tales and John the Balladeer stories. But Wellman was able to earn a year's pay from Amazing alone, one comparable to the many junior scientists and engineers reading science fiction pulps at the time. The eagle-eyed reader will recognize Wellman's science fiction plotting technique as the same the Wellman's friend David Drake uses in the Royal Cinnabar Navy series, although Drake prefers to use classical history instead of the wild west.

Also of interest is Westerfield's hobbyist writers, which includes such notables as E. E. Smith, Abraham Merrit, L. Sprague de Camp, and Ralph Milne Farley. Although hobbyist might be too much a diminishment of these men's second careers. None was reliant on writing for their primary source of income.

It is easy to view with perfect hindsight the authors of the past. Columns like Westerfield's allow a clearer glimpse into what a writer's contemporaries thought at the time, as well as give hints to now forgotten writers of merit.
Posted by Nathan at 1:07 PM