A Quick Peep at the Spicy Pulps 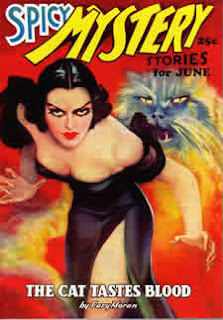 Starting to look into the spicies via the Blood N Thunder guide. Looks like I'll have to add Spicy Mystery to the most influential pulps list. It started the weird menace craze that damn near caused the government to kill the pulps. Weird menace also drove the kids into comics.

Part of the reason the spicies remained popular with authors is because they PAID. Not just on time, which was a novelty, but well--as in 5 cents a word at a time where 1 cent a word was professional rate. The problem is, in markets limited to innuendo and indirect description of undress, only a score of authors could write within the rules.

Guess how many of those were Weird Tales authors writing under pseudonyms.

Three, including R.E. Howard as Sam Walser . (As I said, at least the spicies paid, which wasn't always the case with Weird Tales under Farnsworth Wright.) Add three more WT writers willing to write spicies under their own name, including E. Hoffman Price and Henry Kuttner.


That said, the rest of the field wasn't quite up to the same quality. The catch was being able to write suggestively without resorting to tab A into slot B depictions of the act, and few could deliver.

Anatomical descriptions were out, as was complete nudity and any details of the act the heroine submitted to. The women could disrobe voluntarily or have their clothes torn from them, but some scrap of cloth had to remain. The idea was to have a strong sexual element without being obscene or vulgar. That said, right now, many YA, LNs, and romance novels would be too explicit for the spicies.

But with (the barest hint of ) sex selling, the rest of the story not surprisingly fell by the wayside. Many of the spicies chose exotic settings as to offer more convincing opportunities for the ladies to be in undress. Unfortunately, the exotic settings and plots don't compare to the descriptions found in the hero pulps and Weird Tales. Everything was a thin excuse to get to the ellipses, where the real action occurred in the readers' minds.

To no surprise, with the restrictions of the spicies compare to outright girlie or "smoosh" magazines such as Stage and Screen Stories and Tattle Tales, which both featured far more revealing covers, writers made up for lack of titillation with a penchant for peril, which became impending torture, which became weird menace. Afterwards, the spicies burned out as stronger thrills and more explicit images became easier to acquire. But for five years, the Spicy was queen.
Posted by Nathan at 4:52 PM