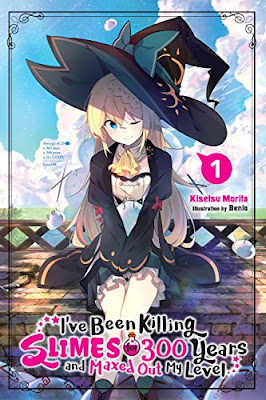 Stop me if you've heard this one before, isekai and light novel fans. A salaryman burnout works themselves to death at their desk. As they enter the afterlife, a kind deity takes pity on them, and offers a chance to have a second life in an MMO-inspired world--

This time, it's different, I swear. This time the burnout's a woman. And, believe it or not, that makes all the difference. For, in I've Been Killing Slimes for 300 Years and Maxed Out My Level, Azusa, our immortal main character, doesn't set out to change the world or right wrongs. Instead, she embraces the leisurely life of a mountain witch, only working when needed or if the mood takes her, an immense departure from her workaholic to please everyone life in Japan. Problem is, 300 years of killing slimes for spell components and medicines builds quite the experience pool. Without realizing it, Azusa's become as strong as an end-game raid boss. And, as word gets out, adventurers rush to her, eager to test themselves against her. Meanwhile, all Azusa wants to do is enjoy her idyllic life and care for her village...

I'll be honest, I bought this on accident and only kept it to see what a feminine take on the familiar and well-worn modern isekai tale (such as KonoSuba). After all, the typical tale focuses on adventuring, getting stronger, and munchkining through battles, typically from a male's perspective as he grows from a new player into John Carter of Mars. No one takes the time to dwell on the experiences of a homebody witch. Instead, I've Been Killing Slimes follows a different track, widening the one made by Miss Kobayashi's Dragon Maid and similar stories.

It's no accident that Azusa's a witch in this new world. Witches in Japanese media are removed from their more sinister connotations in Europe, and are instead cute magical girls. These cute witches dress up in fancy costumes even as they explore adult roles and responsibilities. And, as a 27-year-old burnout, Azusa sacrificed much of life and what it means to be an adult to work. As the adventurers and adventures come to Azusa, she learns to be a guardian, a mentor, a friend, and a mother. Everything that the cares of work choked out of her life.

Well, except being a wife. And, just like Miss Kobayashi, it's lilies not roses for Azusa.

And yes, Azusa gets a dragon maid, too.

I'm a little confused as to the target audience of this anti-workaholic idyllic fantasy. The hints of yuri romance suggest a male audience, but the artwork lacks the preening fanservice common to male-oriented works. But there's no real romance for the ladies, and the artwork lacks the fashions and fashionability of teen girl comics. But it reads quickly enough and is convincing in its characterization. I've known more than a handful of gamer girls who, like Azusa, embraced crafting and harvesting instead of raiding the Lich King, for instance. And Yen Press continues their excellent translation work.

Storywise, I've Been Killing Slimes follows the kishotenketsu structure, creating an episodic story. A new threat intrudes upon Azusa's tiny village which complicates her relationships, Azusa confronts the intruder, who usually isn't as she first appears. Azusa then helps her new guest through some trial, and the web of relationships around the witch grow richer and more complex. It's cute, peaceful, and utterly formulaic with a side order of power creep.

Ultimately, I've Been Killing Slimes is a pleasant diversion, but little else. This one is for slice-of-life fans and jaded tropemasters to enjoy. Those looking for excellent female isekai should instead watch Magic Knight Rayearth, Fushigi Yugi, or Vision of Escaflowne.
Posted by Nathan at 4:34 PM