The Avenger, The Lady, and The Wheel 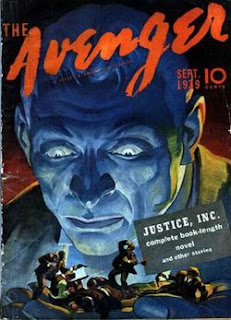 One of the delights in reading the pulps is being able to trace various sources of inspiration, such as Manly Wade Wellman's wild west plots or C. L. Moore's use of the Gothic poisoned garden. Some of these inspirations are more direct and well-known. The Secret Six millionaires who funded the fight against Al Capone resurfaced in Amusement, Inc. The Shadow and Doc Savage both drew heavily on the adventures of Colonel Percy Harrison Fawcett, most recently of The Lost City of Z fame.

I recently came across another direct pulp inspiration in another media. Inside the pages of Hitchcock, by Francis Truffaut, the famed suspense director Alfred Hitchcock is interviewed about many of the movies in his career. One in particular sounded familiar, 1938's The Lady Vanishes, the film that brought Hollywood's attention to Hitchcock. From Wikipedia:


"The film is about a beautiful English tourist travelling by train in continental Europe who discovers that her elderly travelling companion seems to have disappeared from the train. After her fellow passengers deny ever having seen the elderly lady, the young woman is helped by a young musicologist, the two proceeding to search the train for clues to the old lady's disappearance."

Swap the train for a plane, the elderly lady for a wife and daughter, the menacing spy ring for the mob, and the young woman for a Doc Savage style adventurer, and you have the origin story for 1939's The Avenger, as Richard Henry Benson's adventures begin when his wife and daughter vanished mid-flight from the seats next to his. Everyone thinks Benson is insane, with a brain flu that tells him he has family not his own. The shock turning Benson's skin and hair a steel gray is a unique touch though. 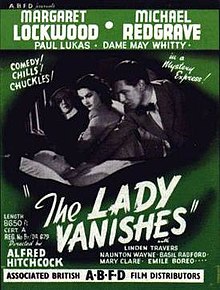 Hitchcock's movie is drawn from the 1936 book by Ethel Lina White, The Wheel Spins, but he indicates that there might be an earlier source:


The whole thing started with an ancient yarn about an old lady who travels to Paris with her daughter in 1880. They go to a hotel and there the mother is taken ill. They call a doctor, and after looking her over, he has a private talk with the hotel manager. Then he tells the girl that her mother needs a certain kind of medicine, and they send her to the other end of Paris in a horse-drawn cab. Four hours later she gets back to the hotel and says, “How is my mother?” and the manager says, “What mother? We don’t know you. Who are you?” She says, “My mother’s in room so and so.” They take her up to the room, which is occupied by new lodgers; everything is different, including the furniture and the wallpaper.

It’s supposed to be a true story, and the key to the whole puzzle is that it took place during the great Paris exposition, in the year the Eiffel Tower was completed. Anyway, the women had come from India, and the doctor discovered that the mother had bubonic plague. So it occurred to him that if the news got around, it would drive the crowds who had come for the exposition away from Paris.

The criminality and spycraft is distinctly White's addition to the story, and the close parallels to The Wheel Spins and The Lady Vanishes suggest that Lester Dent, Walter Gibson, or Paul Ernst was familiar with either the book or the movie. However, Gibson also drew heavily on French influences for The Shadow, so it would not be a surprise to find out that he drew on the Paris version of the story to help create The Avenger. The real answer might be hidden within the Street & Smith archives.