Out Today: Queen of the Martian Catacombs 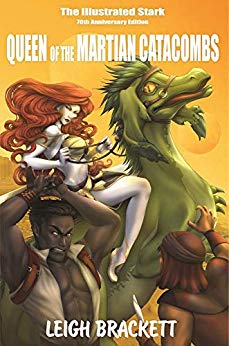 Trouble is brewing on Mars... With civil war about to erupt, Eric John Stark has been sent to investigate an apocalyptic warlord recruiting mercenaries. More disturbing than the promise of a full-scale war to unify the Martian city-states is the claim that Delgaun's ally, Kynon of Shun, has at his disposal ancient sorceries that grant him powers of life and death.

When Kynon's mistress, the beautiful Berild, takes an interest in Stark, the mercenary swordsman finds himself caught in a web of betrayal and evil magic. Can Stark unravel the mysteries of the lost Martian tribe and pull Mars back from the brink of war? The mysterious Berild is prepared to kill to keep the secret buried in the deserts of Mars--or offer it up on a plate to stark if he will help her conquer the Red Planet!

This 6″ x 9″ volume contains Queen of the Martian Catacombs, by Leigh Brackett, fully illustrated by Star Two, with an introduction by Nathan Housley.