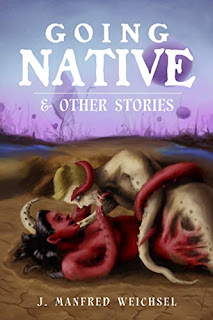 At a time where many are trying to claim the mantle of what Dangerous Visions should have been, J. Manfred Weichsel's Going Native brings a pulpy horror to six speculative fiction tales that stray perilously close to the live wires of impolite society without resorting to preaching or morality tales. These tales originally appeared in Cirsova, Fierce Tales: Savage Lands, Weird Mask, and Millhaven's Tales magazines, and include:

"The Funniest Story Ever Told" - This is a vicious little take on government and elites. While many who have read this story laughed, I found the tale less funny amusing and more "I have to laugh or I'll scream," given current events.

"Complicit in Their Bondage" - And now we get to a truly dangerous vision and one I'm surprised hasn't happened yet. An African-American soldier gets swept up into a renegade British breeding program. Normally, this sort of flesh-shaping is left to aliens, but it will likely happen among those who claim to be the elite.

"The Garden of Prince Shi-Wiwi" - I'm a sucker for all things chinoiserie. This story's a buffet of lessons about inhumanity inside a deadly garden. Compassion may have its own cost.

"Alter-Ego" - My mind's spinning with all the multiple personalities playing roles in convoluted and Gothic webs of intrigue. While the narrative thread might be clearer, it brings a sense of horror

"We Might Not Have Fire" - This is an even scarier dangerous vision of an enslaved future. Think The Time Machine meets A Princess of Mars.

All in all, an excellent set of stories, with a heavy suspicion of those who would claim to be our betters, a heavy pulp vibe, and a place at the Great Conversation of the West.
Posted by Nathan at 6:22 PM