In Search of a Galaxy Far, Far Away

The Disney revival of Star Wars has been riven with controversy and growing discontent. For every Rebels, there has been an Aftermath or three--and host of blogs, podcasts, and videos from fans searching for that lost feeling of a long time ago in a galaxy far, far away. Fortunately, in the frontiers of independent science fiction, a small band of authors have taken upon themselves the challenge of reviving the laser sword and droid adventures of the original trilogy in all new stories, new settings, and new innovations on the familiar formula. In the wake of The Last Jedi, let's take a look at two of the most recent novels to recapture a bit of that old Mos Eisley magic. 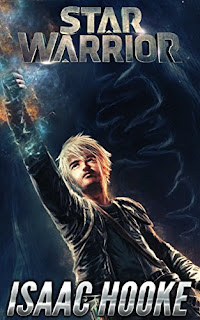 Fans looking for a mystical sword and planet adventure in the mold of A New Hope should try Isaac Hooke's STAR WARRIOR. Like many indie/frontier science fiction stories, Star Warrior is a genre-blender, combining a roaring sword and planet adventure with elements of the litRPG genre and a even a dash of cyberpunk. Tane, a hydroponics farmer from a backwater planet, goes into town for nanotech augmentation. While there, he attracts the attention of an ancient extra-dimensional foe as well as the Volur, an order gifted with the ability to wield the Essence. Per the cover:

"Soon Tane finds himself on a frenzied flight across the galaxy with a woman who can warp the very fabric of spacetime, her bodyguard--who’d just as soon kill Tane than protect him--and a starship that calls him snarky pet names. He's on the run not simply from the aliens but the whole damn human space navy.

"He only wished he knew why."

LitRPGs mean character sheets, and Star Warrior's nanotech system has them in spades. Like many an RPG, the more Tane uses a skill, the more it levels up. Buying nanotech allows him to increase these skills, although Tane suspects the leveling system is a scam by the companies to make people buy more nanotech. After all, the first hit is free...The crawl of characters sheets during these segments is admittedly not to my taste, but the explosion of the litRPG genre over the past couple years shows that there is a market willing to embrace them. Fortunately, Isaac Hooke makes the crunch make sense in terms of the setting and the story, preventing the occasional digression into the stat sheets from grinding the plot to a halt.

Star Warrior also seamlessly melds Luke Skywalker's Jedi journey with Robert Jordan's Wheel of Time. Tane steps into the journey of Rand al'Thor, complete with analogues to Aes Sedai, Warders, saidar/saidin, the Forsaken, and the Prophecies of the Dragon. Seamless is not an exaggeration, as the cosmology behind the two parts of the One Power conveniently map to the Light and Dark Sides of the Force. Furthermore, Tane's journey takes him from a farm attacked by near-mythical aliens to an Essence reservoir of immense power that will reveal his destiny.  It's Eye of the World dressed in the pulp/movie-serials space adventure of Star Wars, stripped of the bramble of viewpoint characters and the battle of the sexes that hampered the Wheel of Time. It helps that Thane's personality is closer to the pulp mold than Rand al'Thor. And there are enough starfighters, droids, and aliens to please readers thirsty for more Star Wars. 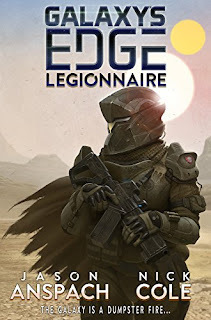 For those who prefer a more militaristic take on the Star Wars formula, there's Galaxy's Edge, the breakout series of 2017 by Jason Anspach and Nick Cole. Released on a monthly basis, this saga of a spreading galactic civil war starts with GALAXY'S EDGE: LEGIONNAIRE and the Battle of Kublar. And in the words of Sergeant Chhun:

The galaxy is a dumpster fire. A hot, stinking, dumpster fire. And most days I don’t know if the legionnaires are putting out the flames, or fanning them into an inferno.

At Kublar, Sergeant Chhun gets his answer. As a member of the Legion, an elite fighting regiment that the Empire's stormtroopers should have been, he is thrust into the mire of a peacekeeping mission alongside Victory Company. But when their cruiser Chiasm explodes overhead, what should have been an annoying milk run turns into a debacle of the likes of Black Hawk Down. Now, fighting every step of the way towards their eventual extraction, the skills of Sergeant Chhun and Victory Company are put to the test as an entire planet tries to wipe them out, spurred on by the meddling of rebels. And it is this spark that will soon blaze into civil war.

If Star Warrior patterns itself on A New Hope, Legionnaire is pure Clone Wars. Like the animated series, the troopers are a mix of numbers and nicknames, fighting for each other with all the grit and professionalism demanded from contemporary mil-sf portrayals. Meanwhile, the machinations of a corrupt and decadent government threaten to erase what the Legion has purchased with blood. If this is a familiar story to vets and history buffs, it is one played out on the headlines of the last fifteen years. When recounting the genesis of the series, Jason Anspach said, "Legionnaire was an idea I had after reading a soldier's memoir recounting his time fighting house-to-house in Fallujah. I thought, what if I wrote a book like this, only put in a Star Wars-like future? And so, Legionnaire was born." The result, as one reader put it, is "a work of military science fiction so detailed you can feel the equipment and choke on the dust.”

The fires of the Battle of Kublar forge iron bonds between the survivors that get tested time and again as, each in their own way, they fight to prevent the slide into disillusionment and chaos. And when the Legion splits in the civil war, those siding with the usurping forces do so in an attempt to force the Legion to return to the ways that once brought it glory. This adds a welcome touch of moral complexity to the ensuing war that Star Wars lacks..

Later books will expand into smugglers vs. bounty hunters and intrigue, but the heart of Galaxy's Edge is the remnant of Victory Company and the Legion.
Posted by Nathan at 6:47 AM