A Murder of Manatees 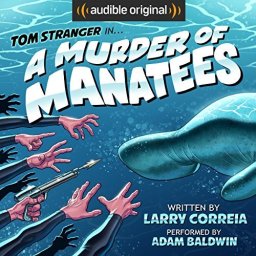 For those who haven’t trusted dolphins since Douglas Adams’ A Hitchhiker’s Guide to the Galaxy, Larry Correia’s new audiobook, A MURDER OF MANATEES, is for you. Performed by Animal Mother himself, Adam Baldwin, the second adventure of Tom Stranger, Interdimensional Insurance Agent, places Tom and Jimmy the Intern in a race against the clock to find the missing Wendell T. Manatee before every Florida in every multiverse is destroyed in retaliation. (As Tom points out, manatees love to blow stuff up.) Plus Tom gives professional advice to Larry Correia–the writer, not the Interdimensional Lord of Hate and the inventor of the Combat Wombat. Apparently writing himself into his own story is a bad decision, and Larry should strive to be more professional, like Stephen King or Clive Cussler.

Like all humor, tastes vary, depending on whose sacred cows are getting gored. Or, more appropriately, whose cows just got hit by the Death Star. Larry Correia cuts loose on A Murder of Manatees, as he does in every Tom Stranger adventure, and all subtlety and restraint are gone. It’s open season on memes and newsmakers, wrapped up in exploding mechs, dimension hopping, bar fights, and evil dolphin mercenaries. Or pretty much the average day on Correia’s blog, where many of the jokes originated.

Following in the steps of Monster Hunter International, Correia doubled-down on the challenge to find the most boring occupation possible, and makes excellent customer service amusing. Straight-laced Tom Stranger is a droll badass who lives to provide exemplary customer service, while Jimmy is a parody of a college protester who used not just charisma, but all his stats, as a dump stat. And while Jimmy is the butt of some well-deserved jokes, he also gets a chance to shine every now and again, much to Tom’s confusion and wonder. This odd couple works well together with Tom navigating the perilous currents of interdimensional insurance while Jimmy blunders into usefulness.

An audiobook lives and dies on the performance of the narrator. Adam Baldwin is an inspired choice, forgoing the customary detached and dry delivery to gleefully revel in the madness. His rapid and forceful pacing adds to the intensity of Correia’s chaotic action scenes while giving a touch of deadpan to the humor. Oh, and Baldwin’s attempts to speak the highly nuanced and melodic manatee language have to be heard to be believed.

Just not while drinking.
Posted by Nathan at 3:16 PM