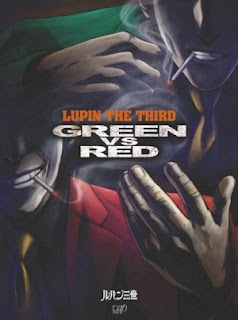 One of the stranger entries in the franchise, Lupin III's 40th anniversary special, the 2008 Green vs. Red, took a risk by not featuring its namesake character at all. Instead, it pitted two of the most iconic versions of Lupin against each other in a fight for the Lupin name, the Green Jacket against the Red, each worn by an impostor to the name. Through non-sequential story-telling, the audience learns about the man who would wear the Green and why he would become the world's greatest thief.

Yasuo, a down on his luck ramen cook, comes across a green jacket and a Walther P38 by accident. Mistaken by the police for Lupin III, Yasuo decides to become yet another of a long line of impersonators trying to take the place of the missing master thief. As he studies the skills of the master, Yasuo starts picking pockets, first to buy presents for his reporter girlfriend Yukiko, and then to help pay for her family's medical bills. As his dissatisfaction with his life grows, Yasuo retreats into the persona of the Green Jacket Lupin until he decides to prove himself as the real Lupin. When another impersonator gets arrested for mere shoplifting, a legion of Lupin look-alikes descend upon the town, each wanting to prove themselves the real deal. But Yasuo proves himself better than the rest, and to crown himself as Lupin, he sets his eyes on the Ice Cube diamond, setting out on a heist with Jigen, Goemon, and Fujiko. He is stopped, however by a Lupin in a Red Jacket. Claiming  to be an impostor as well, he challenges Yasuo to a duel for the Lupin name. As Green and Red square off, other impostors swarm, Zenigata chases, and Yukiko learns the truth behind Yasuo's new hobby. And when things can't get any worse, the Red Jacket Lupin might be the real one...

This 40th anniversary special is not really a Lupin heist. Rather, it combines the story of a discontent salaryman with the escapist fan fantasy of becoming one's hero. As such it is aimed at middle-aged men, both the office drones tired of slaving away in a cubicle and the arrested-development cases who give the medium the same stigma that computer games once had in Japan. But where fannish hero fantasies inevitably plunge towards cipher main characters and middle school hijinks, Yasuo's concerned with keeping his relationship with Yukiko and working his job. The out-of-sequence storytelling and the ambiguous ending are also aimed at a more mature audience than the standard anime fan of its time. But it is Yasuo's thirst for something more adventurous than the every day which resonates with both. As such, there's more heart here than in most Lupin movies. Yasuo is a lovable Average Joe doing the best he can, until he finds what he's truly good at. But his nightly sprees affect his relationship with Yukiko, even as his willingness to help with her family's medical issues further compels him to the next heist. But as the cares build on Yasuo's shoulders, the temptation to escape responsibility be becoming Lupin grows. Like many recent remakes, this makes an engaging story--or it would if it bore any other title without the expectations brought by the name of Lupin III. 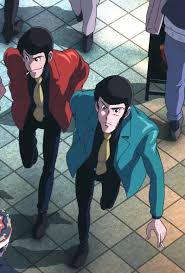 It's no surprise that the most self-referential and fan-fantasy oriented Lupin would come in the middle of the otaku1 years of anime. In addition to the at least five different Lupin character models seen in the million Lupin march of the credits2, the theme to Castle of Cagliostro opens the show, a treasure from the $1 Money Wars TV special appears again, and a fleet of yellow Fiats fills the screen like police cars in a Blues Brothers movie. Keep an eye out for the Lupin-in-an-afro Nabeshin, the anime avatar of former Lupin director WATANABE Shinichi3, a common cameo in anime during the late 00s boom. But perhaps the most telling and subtle nod to both the fans and Lupin history can be found in the names of the main couple, Yasuo and Yukiko, who take their names from the first voice actors for Lupin and Fujiko, Yasuo Yamada and Yukiko Nikaido. And that's just scratching the surface. It's fanservice galore, although of a different type than the nudity that has become synonymous with that term.

Yet that fanservice caters mostly to the hard-core fans, and is a warning sign to the health of the franchise. With such reliance on past glories and a small but fanatic fanbase other shows have allowed writing and animation quality to slip as they chase the short-term windfall from eager spenders. And, as in any group where the extreme drive out the causal, the audience shrinks and the show spirals towards cancellation 4. From 2002-2012, the franchise turned to celebrating three anniversaries and the departure of a beloved voice cast, so a host of familiar villains from previous adventures came back. And the ratings of the annual Lupin III TV special slid year to year, until 2013 saw the last. While the Lupin franchise has reinvented itself, between The Woman Called Fujiko Mine and the Italian adventures, this self-referential fanservice still lingers, with the shadow cast by Castle of Cagliostro as the longest over the franchise.

Red Jacket Lupin's ruthlessness coming to the fore in his duel with Yasuo heralds the return of Lupin's darker side. Prior to Castle of Cagliostro, Lupin was portrayed as almost a Bond villain, with henchmen everywhere, a cavalier attitude towards life, and a ruthless glee in plunder, rapine, and rape. Starting with Miyazaki's involvement from the first series and all but complete in Cagliostro, the sinister mastermind was pressed into the role of a buffoonish hero, the legacy of the animation master's different vision for the character. Even Dead or Alive, the single film directed by manga artist Monkey Punch, still clung to the post-Cagliostro depiction. But as the 2002-2012 anniversaries prompted a return to the roots, Lupin's backbone and cunning returned slowly, culminating in the display of outright mastery lauded in Daisuke Jigen's Gravestone. As a character, Lupin works best when the buffoonery is balanced over his intimidating menace, an act that few have mastered. Fortunately, the pendulum continues to swing towards displaying his competence.

Green vs. Red is both a departure from the classic Lupin adventure and a celebration of its history. Intended as an ode to the fans, Lupin's absence may put them off. Although square in the middle of the merchandise moving anime boom of the late 00s, this strange experiment does point towards the darker reimaginings of the future. As such, this one is best saved for fans alone, and after having watched a few of the more standard heists first. Long time fans should take a chance on this heart-felt story, but those taking a chance on Lupin for the first time should try Castle of Cagliostro, The Fuma Conspiracy, or Daisuke Jigen's Gravestone instead. 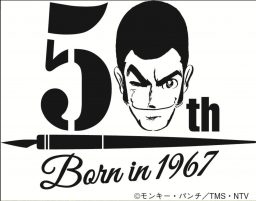 1. The otaku years are my name for the years between 2006-2011 where anime worried more about selling tons of merchandise to a small number of rabid fans instead of creating quality shows to a wide audience. At first there was a boom, then the bubble burst, and then the medium crashed.
2. These include the Green Jacket Lupin of the first TV series, the Red Jacket from the second, the Pink Jacket from the third, a formal-dress Lupin from the wedding in The Fuma Conspiracy OAV, and the Lupin from the Mystery of Mamo movie.
3. Forgive the divergence from the Anglicized name order I normally use (given name before family name), but the Japanese naming order (Family name before given) is necessary to see the origin of Nabeshin's nickname.
4. For an example in real-time, watch Marvel Comics' current plummet in sales.
Posted by Nathan at 1:00 PM