The Worst is Yet To Come

Author Earnings recently released their statistics for 2016 book sales. As industry hands and book reading fans poured over the results, one of the more interesting facts is that science fiction sold the least of all the major categories. This is not a surprise to those who have been following the shrinking sales of the Big Five in this category, although it is still unwelcome. Unfortunately, the worst is yet to come. 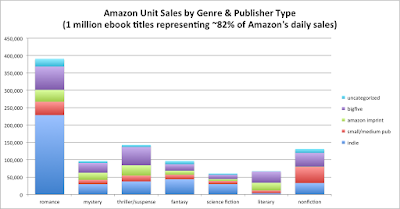 A survey of modern science fiction shows a repeated pattern of extinction events. In the 1950s, the pulps died. At the end of the Crazy Years of the 1970s, magazines died as the primary medium of science fiction and backlists died. The 1990s and early 2000s killed off the midlist writer. And, as the same old song plays of magazine sales drying up, rumors of publisher woes, and publisher wisdom telling authors that science fiction cannot sell, we stand on the verge of the next great crash for the genre. That this crash is happening in the 2020s and not in the 2010s is due to the 1990s' publish woes lasting into the 2000s, pushing back the date of the upcoming crash.

Each crash came about at the intersection of a change in the publishing industry and soft sales. The pulps failed as digest and women's magazines grew profitable. The novel grew ascendant in the 1970s, and changes in tax laws made backlists a tax burden. Reliance on Bookscan and other sales tools sent publishers looking for blockbuster bestsellers instead of growing their midlist writers. And, in the current day, ebooks are proving just as disruptive, with more than 80% of all 2016 sales coming from ebooks according to Author Earnings. But while writers cannot control the changes in the industry, they can at least avoid the mistake that repeatedly led to soft sales:

This is not the same thing as factual accuracy. The crunch of accuracy is not even a hallmark of science fiction. Rather, the realism described here is the literary realism as that ushered in by William Dean Howells, who


...proscribed writing about “interesting” characters–such as famous historical figures or creatures of myth. He decried exotic settings–places such as Rome or Pompeii, and he denounced tales that told of uncommon events. He praised stories that dealt with the everyday, where “nobody murders or debauches anybody else; there is no arson or pillage of any sort; there is no ghost, or a ravening beast, or a hair-breadth escape, or a shipwreck, or a monster of self-sacrifice, or a lady five thousand years old in the course of the whole story.” He denounced tales with sexual innuendo. He said that instead he wanted to publish stories about the plight of the “common man,” just living an ordinary existence.

This avoidance of the fantastic, the exotic, and the sensational is directly opposed to the spirit of science fiction, to the extension of an idea into a speculation of the unknown. However, literary realism became the primary philosophy of literary fiction, and every attempt by science fiction to become more literary has also included a fascination with realism. And realism tanks sales of fantastic literature. For example, when Campbelline writer Babette Rosmund took over the editorialship of The Shadow Magazine in 1946, she introduced changes to the stories that fell in line with the realism en vogue with the new generation of pulp editors:


While the writing in this new pulp was palatable, the major problem was that The Shadow no longer existed in it. Instead, Lamont Cranston became the hero, solving mysteries with the police. All hints of a secret identity were ignored. The Shadow lost all his superhuman qualities. His guns remained holstered, his laugh rarely pealed across the pages. Removed were the cast of supporting characters and the villains. The agents and the gadgets. The Shadow's laugh and his blazing 45's.

Under her direction away from the fantastic and exotic elements that were essential to making the Shadow, "the magazine fell back to bimonthly and then to quarterly as sales continued to fall."

In science fiction, every instance of pre-crash sales slumps can be traced to the rise of realism. Campbell introduced realism in science fiction and fantasy, a change which the Futurians accelerated in the 1940s and 1950s as they attempted to wag the dog of science fiction and fandom to shift it more to the left. In the 1960s, both New Wave and its opponents experimented with forms of realism, until in the 1970s, well after the original New Wave had ended, the old guard decided to out New Wave the New Wave. The 1990s crash corresponded with another flirtation with literary realism, as Kristine Kathryn Rusch relates:

This is the reason that science fiction as a publishing category nearly died off in the 1990s. Things have improved a lot in this century, but that doesn’t help the perception that the writers who toiled in the successful, but less accepted, subgenres didn’t exist at all.

I mention the literary part of the genre because it held its strongest sway in the short fiction categories. It’s easier to maintain a magazine with literary pretentions than it is to maintain a book line with the same attitudes. A lot of sf book lines died in the late 1990s and early 2000s. Some magazines, including the one that I used to edit, lost a vast amount of readership when those literary attitudes I just mentioned took over at the turn of this century.

Yet Kristine Kathryn Rusch shows the way out of the upcoming crash:


On the other hand, some of the sf magazines grew in circulation. For example, Asimov’s Science Fiction grew in overall circulation after Sheila Williams became editor. She got rid of a lot of the slipstream fiction (the stuff you couldn’t tell from realistic fiction) and purchased a lot of space opera and adventure fiction.

Embrace the fantastic and the exotic. Embrace adventure. These are the key to sales in science fiction, and the shelter from the upcoming storm, just as they brought science fiction out of its previous crashes. Don't make the same mistake that drove hundreds of writers out of the field. Avoid realism.
Posted by Nathan at 10:49 AM