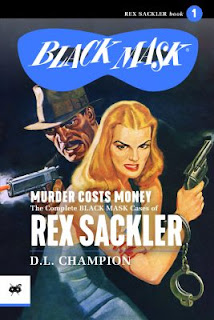 As part of the 100th anniversary of Black Mask, Steeger Books recently announced that they will be premiering the first six titles of a new pulp reprint line, The Black Mask Library, at the as-of-yet uncanceled Windy City Pulp and Paper Convention. Like the blog-favorite Argosy Library, each title will feature a rare or out-of-print series from the pages of Black Mask, accompanied by cover art from the magazine.

The titles will include:

Dead and Done For: The Complete Black Mask Cases of Cellini Smith, by Robert Reeves

Blood on the Curb, by Joseph T. Shaw, editor of Black Mask

While it is uncertain as to how the current unpleasantness may delay these plans, I intend to review at least one of these titles as soon as they are available. Black Mask gave the world the hardboiled detective and, later, film noir, and rightly has its place among the most important pulp magazines. Hopefully, Steeger Books will take a chance and publish stories in some of the other genres Black Mask dabbled in, such as science fiction.
Posted by Nathan at 10:52 AM