The Introduction to Captain Future 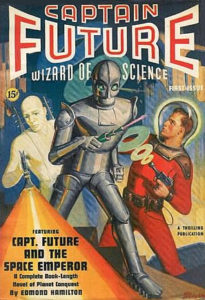 
The most colorful planeteer in the Solar System makes his debut in this, America’s newest and most scintillating scientifiction magazine — CAPTAIN FUTURE.

This is the magazine more than one hundred thousand scientifiction followers have been clamoring for! Here, for the first time in scientifiction thrilling history, is a publication devoted exclusively to the thrilling exploits of the greatest fantasy character of all time!

Follow the flashing rocket-trail of the Comet as the most extraordinary scientist of nine worlds have ever known explores the outposts of the cosmos to the very shores of infinity.

Read about the Man of Tomorrow today!

Meet the companions of Captain Future, the most glamorous trio in the Universe! Grag, the giant, metal robot; Otho, the man-made, synthetic android; and aged Simon Wright, the living Brain.

Captain Future took off in 1940, and his futuristic super-science  adventures lasted, in various magazines, into the 1950s. The World Wrecker, Edmond Hamilton, penned most of the novels, although he was later joined by Joseph Samachson and Manly Wade Wellman. His adventures were revived, in Japan with the 1978 Captain Future anime, and in 2018 with a failed print reboot in America. A German film version is in development, with various sample trailers leaking onto YouTube. PulpFest has an excellent introduction to the good Captain Future, of whom I'll take a closer look this week, as I am currently reading "Captain Future and the Space Emperor". Wellman's Captain Future novel, naturally, is next.

What interests me about this introduction are the references to "scientifiction" instead of science fiction and the clear references to the most extraordinary scientist as the greatest fantasy character of all time. Sure, it may be marketing speak, but it is also a clear tie to C. S. Lewis's German definition of science fiction as "any futurist fantasy." (Perhaps that is why Captain Future was wildly popular in Europe, Japan, and the Arab countries.) Above all, it's a reminder that tastes and even concepts of science fiction weren't as set in stone--or even inevitable--as the fannish histories like to portray.

As of the spaceman Doc Savage and his fight against an almost-Darth Vader-like Space Emperor, we shall see them soon.
Posted by Nathan at 4:28 PM