The Sheriff of Tonto Town 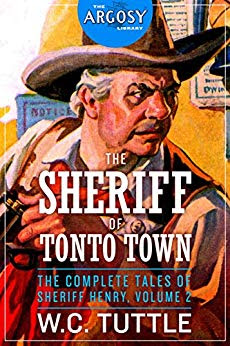 W. C. Tuttle's Henry Harrison Conroy is a lesser-known pulp character. A quick Google search finds pirate sites carrying his stories before any articles talking about him. Fortunately, there is a good intro to Sheriff Henry:

"When we first meet Henry Harrison Conroy he's a down-at-the-heels vaudeville comedian who seems to be modeled on W.C. Fields...Just as he learns his stage career is over, he gets a letter saying he's inherited a ranch in Arizona. So to Arizona he goes."

"Along the way, Henry is elected sheriff as a joke, and turns the joke on the town by remaining in office. He knows nothing of the law, and cares less, but somehow - usually with a drink in his hand - manages to bring about some justice."

Sheriff Henry typically gets tied up in murder mysteries in Western towns, although later stories become more typically Western. In "The Sheriff of Tonto Town", "a dying man who has just discovered a rich Arizona mine" brings problems to Sheriff Henry's doorstep.

The first chapter has Sheriff Henry sorting out a card shark that stole property from a local. From his career on stage, Henry has seen more than a handful of magicians palm a card, and is wise to the card shark's game.

Henry's vaudeville roots will play out throughout the story. Already, there's a sort of verbal and slapstick interrogation of the card shark, complete with a bit of "accidental gunfire". "Das har'ar gon," replied Oscar (the jailer working for Henry), "von't stay cocked." It's the first bit of deliberate humor I've read in the pulps. And Oscar also has the thickest, most cryptic dialect in pulp, a medium already given toward thick and cryptic dialects. Pulps typically err on the side of verisimilitude over readability. Here, it's a step into cryptographic analysis.

As for the Terrible Swede with the hair trigger and impenetrable accent, Henry says: "You underestimate Oscar. Oh, I am perfectly aware that he does everything wrong. But I have a system. I tell him to do something wrong, and he will invariably do it right."

Sheriff Henry soon finds himself embroiled in a Lost Dutchman Mine-style mystery, when a dying prospector tells of a rich strike before h passes on. Not only is the location unknown, so is the matter of who will inherit the claim.

Like Max Brand's Clovelly, much of the novel so far is taken up by the schemes of the characters around the main character, not Henry's actions. Here, Jake West and Doc Sargent scheme to take the dying man's claim, foil happy couples, and hide evidence that West is a wife beater. Henry foiled a plot or two--age and treachery are great equalizers--but the villains drive the plot. Henry spends most of the book offstage. It's almost an inversion of today's storytelling, where the hero drives the plot with his decisions and the villain is the backdrop.

Henry plays up the bumbling fat sheriff, but he, Judge, and the Terrible Swede play adroitly to interfere with their plans. Granted, it's slow reading, but that's to catch up on all the wordplay in the banter. There's no handholding here, even with the humor. Pratchett reads like Carrot Top by comparison. Henry doesn't stop and mug for the camera with his humor. There are no instances where the flow of the story breaks because "we told a joke, now laugh. Please laugh at how clever we are."
But that is part of the approach of the Argosy pulps and 1920s adventure fiction: there is no hand-holding. And if you aren't versed in Western tack and saddle or 17th-century swordplay, you better have a dictionary close at hand.

No hand-holding also carries over into the plot.

The Argosy pulp writers accomplish more in 50,000 words than most writers at 120,000. And even those who write the books of endless pages. It isn't just that today's storytelling has been influenced by publishers preaching padding to meet price points--more than one author I know has remarked that publishers are in the lumber business, not the story business--storytelling and pacing have become decompressed. And with decompression comes indulgence.

Those wanting adventure still won’t be disappointed. There have been murders, backstabbing, several one-punch KOs, claim jumping, poisonings, sackings, and buffoonery from a sheriff too old to find a saddle, much less ride in one. Henry even walks six miles barefoot with soles full of cactus spines. Ouch. Not something most Western heroes would do, but no less a feat of endurance than that of Conan or Stark. Of course, the latter two gentlemen would have avoided the cacti...

But then Henry is supposed to be the least likely sheriff possible. An old, fat, city slicker actor with a faster mouth than a gun. Despite this mismatch of character, the sincerity necessary for pulp adventure is never harmed. "The Sheriff of Tonto Town" is a cozy adventure, a bit more soap-opera-like than most pulps, far more humorous, too; but it doesn't skimp on adventure--or carefully crafted plots.