Knights of the Open Palm 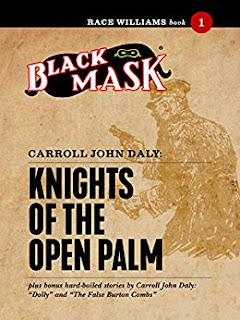 The June 1923 issue of Black Mask was notable, not only for its anti-Klu Klux Klan theme, but also for the appearance of the first hard-boiled detective, Carroll John Daly's Race Williams. Per pulp expert Robert Sampson,


"that strains the definition of detective. A hired adventurer who may occasionally detect if he blunders into a clue the size of a bathtub and painted bright pink. He has little use for clues, even less for chains of reasoning."

Indeed, many of Willaims' first cases owe more to adventure pulps than the long already storied detective genre. But to listen to Race Williams describe himself:


“I’m what you might call a middleman – just a halfway house between the cops and the crooks. I do a little honest shooting once in a while – just in the way of business, but I never bumped off a guy who didn’t need it..."

And in his first adventure, "Knights of the Open Palm", plenty of hooded goons need a little honest shooting. Race Williams is paid to retrieve a son held by the local chapter. The result is part infiltration of a secret society and part Western in hard-boiled clothes--the classic Man from Nowhere who wanders into a town run by a mob of crooks and toughs. But when the Klan tries to intimidate Race Williams, he stands firm and intimidates them back.

No Western--or two-fisted detective story--would be complete without a shootout. It's hard not to imagine this as Tombstone in 1920s Ohio. And, at the end, the white hat, er, Race Williams rescues the kidnapped boy and inspires the town to rise up against the Klan. After all, it is tough for a gang to intimidate people when a newcomer just killed four goons. There's no rabble-rousing on Race's part, just a tough man showing the powerlessness of bullies.

From the first, it is blatantly obvious is that there's no love here for the Klan, but not for the same reasons they're shunned today. Here, they're treated like racketeers and mobsters, a danger to both black and white. The Klan is revealed to be hucksters. "And you got'a have ten dollars--thought if you've got the ten the rest of it can be straightened out." "It" being the race and religion "requirements" to join this "esteemed" organization. The reason why the criminality is emphasized over race? There are a lot of sticky fingers underneath those robes when it comes time for intimidation, which attracts certain types of goons by the trainload.


While some of the slang is dated, the first-person narration is straightforward and current, lacking the "purple prose" that many people knock the pulps for. As far as lessons, the moral here, that hatred breeds criminality, is one that we're likely to relearn the hard way.
Posted by Nathan at 5:32 PM