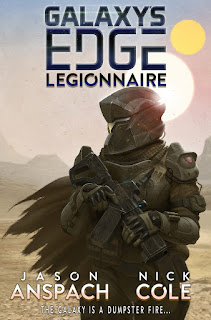 But the galaxy is a dumpster fire. A hot, stinking dumpster fire. And most days I don’t know if the legionnaires are putting out the flames, or fanning them into an inferno.

With those words, Jason Anspach and Nick Cole hooked science fiction readers on Galaxy's Edge, a reworking of everything people loved about Star Wars through the lenses of traditional science fiction and War on Terror veteran sensibilities. Their first book, Legionnaire, proved to be the Black Hawk Down of science fiction, taking a place alongside Starship Troopers, Armor, and The Forever War as a classic of military science fiction. Through nine volumes, the Legion fought against insurgents, rebels, and a strange, impossibly magical warlord who proclaimed himself Emperor. While the fimal volume of the main story, Retribution, might have seen rushed, until a reread of the series reveals how much foreshadowing was set in place from the start, it provided a satisfying ending, a rarity in today's day of endless serials.

Since then, Ansspach and Cole have opened their world to a number of prominent independent military science fiction fiction authors through their Order of the Centurion series, published first as audiobook exclusives through Audible. Anspach and Cole have also dropped hints about upcoming series that cover the Savage Wars, the Galaxy's Edge equivalent to the Clone Wars, bounty hunter contracts fulfilled by the legends Wraith and Tyrus Rechs, and a serial bridging the fall of the Empire to the next grand saga in the Galaxy's Edge universe.

Many a fan might be able to wait patiently for these new stories in the expanding universe of Galaxy's Edge. But for those of us who are impatient, there's Galaxy's Edge Insider.

Insider is a $10 per month subscription services which provides a number of perks, such as swag, discounts, exclusive podcasts, a Tuckerized cameo in future stories, and more. Most important to a reader, however, is the ability to download electronic advanced ready copies (eARCs) of upcoming Galaxy's Edge books. Now, paid eARCs is a not a new service, as Baen is known for selling upcoming new releases as eARCs for $15 each, or about 1.5 times the new release ebook cost to receive the book 3-6 months early. However, for the Galaxy's Edge fans, Insider is far more lucrative. This month offered the ability to download five new Galaxy's Edge novels, including the stunning Savage Wars, and two installments of Takeover, the aforementioned serial. That's $90 of eARCs, or $30 of ebooks in one month.

Future months will bring in additional installments of Takeover, the newest volumes in three spin-off series, and new books in Anspach and Cole's non-Galaxy's Edge projects. But even at one month, the Insider subscription is an excellent deal for fans of the series.