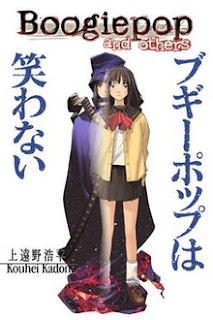 Like Alice chasing the White Rabbit, protagonists in the once popular secret world setting follow a bit of strangeness in an otherwise mundane life, discovering instead vast conspiracies and earthshaking revelations that upend the main character's understanding of what the world is and how the world works. For the shadows of everyday life are full of alien infiltrators, secret societies, living urban legends, ghosts, and other mysteries, each with a hand on the tiller of the world and each trying desperately not to be noticed. Swept up in that madness, suddenly a mundane life becomes something far grander and the world never seems quite so small--or safe--ever again.

These "secret world" fantasies are primary world fantasies, taking place on Earth in the present at the time written, and always offering a peek behind the curtain at Fortean secrets most people are unaware of. Popularized in light novel form by Boogiepop and Others, these secret world novels are a common setting for horror, as well as the main outlet for a pop science fiction junkie for the better part of a decade.

The height of the secret world books came to an end with the popularization of the term chunibyo ("Eighth Grader Syndrome" or middle-school delusions). Many of the stories of secret aliens, superheroes, and living legends found in secret world matched the delusions of grandeur common to a certain phase in a young teen's life, and realism and ironic detachment settled into the genre. Instead of being swept up by grand and hidden secrets, the main characters instead turn to rescue friends from their delusions. And if the delusions turned out to be real secret worlds, the characters view everything through a genre-savvy and often snark-filled lens. The point becomes to move past these delusions and accept life as it is, instead of thirsting for wonders unseen.

Those looking for wonder--or a place to revel in the fantastic unmocked by their peers--soon turned to settings beyond the constraints of the current day, to the video game-inspired settings of isekai portal fantasy.

As always, recommendations are limited to what I have read. 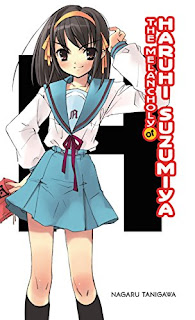 Kyon is ready to start high school after putting aside childish things such as belief in UFOs and superheroes. Then, on the first day of class, he is introduced to Haruhi Suzumiya, a strange girl who has no interest in anything except the weird. Haruhi is unwilling to speak to anyone other than aliens, time-travelers, and psychics. But, after a chance conversation convinces Haruhi that Kyon shares her interest, he gets swept into Haruhi's strange club. A club full of aliens, time-travelers, and ESPers all trying to keep their identities a secret. For Haruhi also has a strange power to influence reality, and it's best for all that she never knows about it.

Admittedly, Haruhi puts the manic into manic pixie girl, but the real charm of the series is watching Kyon play the only sane man among his co-conspirators as they deal with time-traveling hijinks, dimensional shifts, homicidal aliens, and even rival clubs behind Haruhi's back. Over time, Haruhi adjusts to normal high school life, while Kyon warms up to the weirdness that surrounds Haruhi at all times. Kyon narrates the various mishaps in a deadpan that never lets up, no matter what pocket dimension, past era, or alternate timeline he finds himself in. Unfortunately, the complexities of simultaneous alternate dimension and time travel became too much for Tanigawa to navigate, so it is doubtful if the series will ever be finished past the tenth volume. 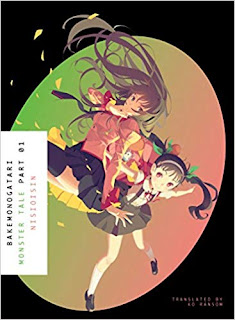 After a particularly monstrous Spring Break, Koyomi Araragi's eyes are open to the various curses, monsters, and aberrations that cling to the people around him. When he catches a reclusive girl in his class after she floats down a staircase, he discovers that she is cursed with weightlessness. Freeing her from this curse only ensnares Koyomi in a strange web of living urban legends and monster tales.

I have reviewed Bakemonogatari both at my own blog and for Castalia House's, and find the series a complex mix of reward and frustration. NISIO ISIN brings two important elements not found in many light novels; a literate playfulness with the Japanese language and a deep love of mystery literature. Keen-eyed readers will see nods to American and Japanese mystery traditions, including a story structure familiar to fans of Doc Savage. Not only does Bakemonogatari play with language, but it is also rich in symbolism as well. The literate approach adds depth and gravity to the living ghost stories. Unfortunately, Bakemonogatari gets a little too taken with its own cleverness at times, and the less said about its pandering to some of the least tasteful trends of late 2000s Japanese pop culture, the better. But if a reader can overlook what for a light novel are minor foibles, the monster tales of Bakemonogatari are among the best in the medium. 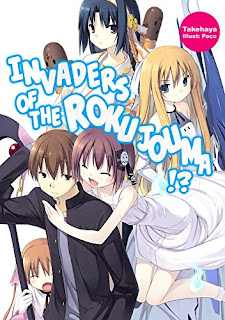 Invaders of the Rokujouma, by Takehaya

Koutarou thinks he's found the perfect place to stay while his father is away. The apartment is close to school, and most importantly, the rent is dirt cheap. However, he soon finds out why, as a ghostly girl, two aliens, an honest-to-the-Moon magical girl, and an underworld princess crash through the door. Each invader wants Koutarou's apartment for their own purposes, but Koutarou is not willing to give up his room without a fight.

Let's get the obvious out of the way, as Invaders has sandpaper rough prose guaranteed to grate on the nerves of anyone with the slightest desire for style. However, what the series may lack in grace, it makes up with a surprising amount of heart. Instead of appealing to the young professionals who enjoy most light novels, Invaders is aimed at a junior high audience who might yearn for a little science fiction-flavored excitement. Freed from the demands of acting cool, the characters are given the chance to revel in the moment, whether it be the classic high school culture festival or ship vs. ship combat between rival space princesses. Uncluttered by the typical demands of fanservice, Invaders instead has room for a slow burn through an ambitious plot through time and space, with the invaders of Koutarou's apartment at the center. Also slowly burning is a rather sweet romantic rivalry as the invaders switch from invading an apartment to invading Koutarou's heart.

Honorable mentions include Full Metal Panic!, by Shoji Gatoh, an alternate history where the Cold War never ended in the 1980s and schoolgirl engineering geniuses are protected by mecha pilot mercenaries without social graces, and A Certain Magic Index, by Kazuma Kamachi, where an unlucky young man gets thrust into an X-Men-style clash between Science and Magic when he meets a young nun.
Posted by Nathan at 5:16 PM