I recently came across a ThePulp.net article covering the 1949 death of the pulps, where Street & Smith axed all their pulps except for Astounding. It parroted the popular wisdom of the time, where changing tastes among the audience doomed the medium. However, what caught my eye was the sales figures included. 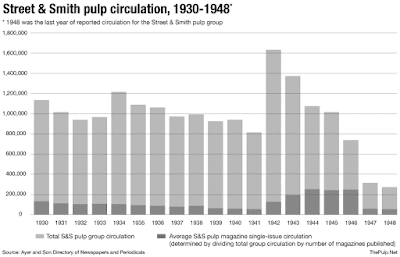 Ignore the average circulation in this, as it fails to note that two titles, Doc Savage and The Shadow, combined for 400,000 to 600,000 and more of said circulation. But there are noticeable trends in the totals. Prior to the slapdown pulp received for the excesses of weird menace, S&S had a floor of around 950,000 issues sold per month, even with the high title churn as everyone tried to create the next The Shadow.

1941 saw a dip as pulp recovered from the legislation affecting the medium, while 1942 saw a banner year for S&S. ThePulp.net claims that S&S benefited from the paper shortage and the ensuing shrinking of titles. Even then, S&S began to shift to digest format instead of pulp to cover costs.

1943 saw the contraction hit Street & Smith, as the company started to shed titles like Unknown, and ushered in new management.

But it was in 1945 when S&S pulps started to die. Among the many incidents that lead to this doldrums was Babette Rosemund's editorship of  Doc Savage and The Shadow. Her fascination with the literary trends of academia torpedoed the sales of those two books, as she pushed hero pulps without any trace of heroism at all. As both shifted from twice a month, to monthly, and finally bimonthly, the loss of sales was felt sharply by the company.

In 1948 and 1949, Street & Smith attempted to revive interest and sales in the pulps, and actually started to turn the decline around. However, with depressingly low composite sales, it is understandable why Street & Smith focused instead on the half-a-million a month sales of Mademoiselle.
Posted by Nathan at 3:59 PM