A reposting of my Puppy of the Month Book Club article on C. L. Moore's "Tree of Life". I've been talking about going into more detail on this link to science fiction's gothic past for a while. Time to reintroduce the idea...

Northwest Smith is dry-gulched in a old temple by patrols. As hunger and thirst start playing with his mind, he see a strange alien girl crying about being lost. He decides to help her, leading her towards a tree mural. She then takes the lead, pulling him into a strange, gray land filled with trees. In the shadows, little people murmur, "beware of Thag..."
Once again, Northwest Smith is alone, once again he is in peril, once again he meets an alien girl, and once again, some thing wants to eat him. What should be formulaic still remains fresh on the strength of the monsters of each story. In this case, Thag is a superdimensional being currently shaped like a tree. It is just as predatory as Shambleau and the Alendar, and it farms its food in a similar manner to the Alendar. But it embodied a different form of malice from the other two. 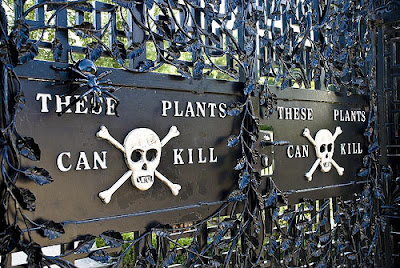 C. L. Moore loves the Poisoned Garden trope. "Black God's Shadow," "Black Thirst," "Tree of Life," and "Scarlet Dream" each feature their own dangerous garden, complete with hidden perils. This trope has a long history in weird fiction, tracing back to at least 1844 when Nathaniel Hawthorne wrote "Rappaccini's Daughter." In it, a young woman, Beatrice, lives among a poisoned garden, guarded by her father and the poisonous plants. Giovanni falls in love with  her, but succumbs to the plants that have made Beatrice poisonous herself. The antidote he made to free her from the poisons of the garden instead kill her. (The text can be found here.) While "Black Thirst" is the purest example of Hawthorne's influence on Moore's storytelling, as it follows the same beats, the influence of the poisoned garden pervades her settings as a key element to the eeriness of her works.
All in all, "Tree of Life" was a solid story, even if Northwest Smith should be locked in a monastery for his own safety.
Check out the Frisky Pagan's take here.
Posted by Nathan at 8:01 AM