Review: When the Death-Bat Flies 4-6 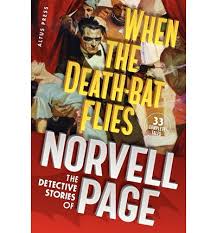 Last time, when we looked at the first half of Norvell Page's "When the Death-Bat Flies":

Hirotoyo had lost his smile, “Speak, my friend, and if I can help you….”

“You can,” Dunne said shortly. “Donald Henderson was murdered last night and the death arranged to look like hari-kari. Another associate of his, Paul Tarsus, said he had been threatened as a result of a death in your own honorable family, Hirotoyo. I know this is false, but in order to clear myself of the murder charge against me, I must solve this crime which the police call suicide.”

Aubrei Dunne and Socks Bee flee from his shot-up apartment and the dead policeman inside. Dunne seeks out Natsuki Hirotoyo to learn more about the Bat of Death, but it is Hirotoyo's guest, Chu Pei-yi, who tells Dunne of its significance. Hirotoyo offers sanctuary, but Dunne instead leaves, only to be picked up by a set of indistinctly Asian thugs, who blindfold him before driving him away. They deliver him to a secret room, where an silhouetted Asiaitic man warns Dunne to stay out of his way, for the Hendersons must be punished. After a second blindfolded tour of the city, Dunne is released, angry that his friend Hirotoyo would treat him in such a manner. He finds Socks, who identifies one of Dunne's kidnappers as Paul Tarsus, whom they met at the Hendersons' mansion. Spoiling for a fight, Dunne and Socks go to the Henderson's where they find a dying man--and the cops!

After enduring a bit of police brutality back at the precinct, Dunne attempts to win the police's assistance in arresting Tarsus by showing how, with a little manipulation and help from an assistance, a man might turn a murder site into a locked-room suicide. The inspectors instead treat this display as a confession, and lock Dunne up. Dunne pleads with them, saying that if they don't free him and arrest Tarsus, there will be more murders. But as accusations of blackmail mount, and no more corpses are found, the blame shifts solely on Dunne's shoulders. After overhearing news of Tarsus's apparent locked-room suicide, Dunne escapes from the police station, eager to ensure Margaret is safe.

At the Hendersons' mansion, Dunne finds another dead cop. After a flash of insight, he calls the police, demanding that they arrest Hirotoyo. After he leaves the mansion, the Asian thugs abduct him once more, dragging him in front of the Bat Throne, where he had be taken before. There, he is forced to watch as Professor Henderson and Margaret are both drugged and forced into the proper posture for ritual suicide. With a single suggestion from the shadowed man on the Throne, father and daughter will take their lives. The shadowed man forces Dunne to be Margaret's second, to end her suffering with the swift stroke of a sword. Dunne instead knocks Margaret unconscious In the resulting melee, Dunne frees the Professor and beats down the Chinese thugs. But the man on the throne escapes. To confront him, Dunne races back to Hirotoyo's house, where the cops shoot him. Bleeding out, Dunne staggers into the house, only to interrupt Chu Pei-yi's attempted murder of Hirotoyo. Confronted by his crimes, Chu Pei-yi kills himself in the Japanese manner. Dunne collapses, but not before he gets a kiss from Margaret.

The significance of the Bat of Death:

“There is a Mongol superstition about the bat. They believe that the bite of a bat steals a man’s soul and that subsequently the man will destroy himself.”

This is echoed in the unique method of murder used in the story, the suggestion of ritual suicide when drugged. Yet it also becomes a moral, as Chu Pei-yi's cleverness (and bat motif) turns on him at the end, leaving him no choice for his pride but suicide. Here, it is the theme and method of murder that force the jumbled chinoiserie on this detective story, and not some lingering Yellow Peril.

Page draws upon the spicies during Margaret's final peril. Female ritual suicide in Japan tended towards the opening of veins, not disembowelment, but this inaccuracy allowed Dunne to linger on a rare display of cleavage and bare tummy. Like many of the spicy adventures, the display of skin is tame compared to what is seen today on small-screen and red carpet, but at a time when pornography was just getting under way, it was risque and sensational. Now, it's mere fanservice. And it was this escalating mix of sex and violence common to the field of weird menace that would prompt a government crackdown within a matter of  years.

Car crash theater continues. While Dunne is not completely swept along by the course of events, only rarely is he ever truly a master of his own fate. In specific high spots, he is able to use his own skills to extricate himself from his perils, but most of the time, the only true escape from one peril is the sudden crash into another, greater peril. It's a little too much action in a small space, and there was more that a few times I had to read back to see just how Dunne got from one disaster to the next.

Rumor has it that "When the Death-Bat Flies" was supposed to be the first of a series of heroic detective pulps had its host magazine not folded. And, if one looks closely, the stamp of the first hero pulp,  The Shadow, is apparent throughout. For in many ways, "When the Death-Bat Flies" revisits the elements of the first Shadow adventure, "The Living Shadow." Dunne and the Shadow both rescue an assistance from self-destruction, both rely on their assistants for important investigative leg-work, both men are masters of the illusionary arts, and both adventure in a Chinatown where Asiatics can be thug, and villain, hero and pillar of society. And, at the end, the assistant's role gives way to the hero's triumphant confrontation of the criminal mastermind. But where Gibson explores his hero through the relationship with his assistant who acts as the protagonist, Page keeps Dunne in the central role of hero and protagonist. As the author of The Spider, Page had his own take on the hero pulps, and while he was not shy about borrowing, he made his work uniquely his own. Something Detective Comics should have done with the Batman...
Posted by Nathan at 12:32 PM